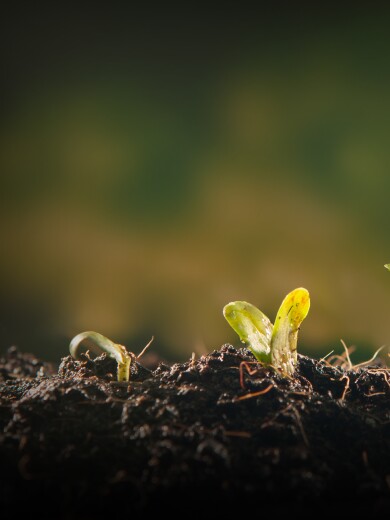 "How do you truly build sustainable values and cultures?", asked Swami Raote, Worldwide President, Johnson & Johnson Vision Care in his opening remarks at the 2019 Data Science Showcase, before answering with an analogy to nature.

It's simple, he said. You need two things. Seeds and soil. In our case, those are the globally diverse, purpose-driven people we hire, together with the nurturing elements rooted in Our Credo. And Swami's story—the story of how one particular seed became soil so that others could grow—is part of the reason we're rapidly approaching an inflection point in data science at Johnson & Johnson today.

Data Science and the Future of Health: Swami's Vision

When technology and healthcare converge in creative ways, incredible opportunities to transform and improve personal and public health emerge. For Swami, those opportunities are founded in a fundamental insight.

“Health happens to us all of the time,” he said. “It’s a confluence of genetics, lifestyle, life stage, environment and more. Over the last few decades, improvements in human health came through specialization—a depth of understanding about our organ systems and how to mend them. But human health is interconnected and integrated. Data science holds the promise to provide a holistic, connected view of health, together with the ability to digest and synthesize multiple factors at scale to help predict and manage health proactively. That’s the promise of the future.”

As a member of our global leadership team, Swami has unique insights into what that future holds. Right now, for example, he’s exploring questions like:

These aren’t hypothetical questions for Swami, but precisely what he’s working on today. He offered the following example by way of illustration: "Let's say that you're going in for a checkup, so your personal health data needs to go to your doctor. No problem, right? But what if, from there, it needs to go another step"—say, to an additional specialist, a payer or any of the myriad stakeholders involved in modern healthcare delivery?

“This is one of the active conversations within our data science teams at Johnson & Johnson right now,” Swami explained. “Patient data must be very carefully managed if we want to be enablers of health. AI and decision science in health should not just be about intelligence, but about empathy, too, and as part of that, privacy, transparency, inclusivity and adherence to medical ethics are going to be key. We want to respect not just the laws of the land, but how people would like their data to be used for personal and public good.”

A Costly Mix-Up at the Start of a Remarkable Career

Whatever it takes to enter the ranks of our global leadership, you would be hard pressed to deliberately follow in Swami's footsteps. That's because what set in motion his early career was really more of a misstep—and not his own. Rather, it was an administrative snafu of astonishing proportions.

"Growing up in Mumbai, India right next to a medical school, I always wanted to be a doctor, and I had the right test scores to go," he said. "But my examination board messed up in transferring my test scores, which were incorrectly entered into the system. I was shocked! I appealed, of course, but it didn’t matter. In the end, there was nothing I could do."

For a short time, Swami confesses the mix-up destroyed his faith in education altogether. (That faith, he's happy to report, has since been restored.)

So instead of studying medicine, Swami settled on what seemed the next best thing: pharmacy. A few years of school and a modestly successful professional practice later, he decided to return for business school, where he recalls being a decidedly mediocre student. Still, he managed to land a summer internship with a large global bank, and that led to a pre-placement offer.

Fast-forward a few promotions and lateral moves later, Swami found himself on Wall Street. (If that's not the least resolute, least scripted path to the upper echelons of global finance on record, it must be a close second.)

For his part, Swami looks back at his tenure in the world of finance with equal parts bemusement and self-reproach. Speaking to the latter, he said, "My early career made my worst traits worse. Success meant having the loudest voice in the room, caring only about yourself and finding creative ways to pretend that beyond your opinion nothing else mattered."

From the World of Finance to Johnson & Johnson

After a few years in finance, Swami recalls feeling “kind of empty." But there was at least one positive outcome: During this time, he met a Johnson & Johnson employee—later his supervisor—who showed him his soil. A new path beckoned, and Swami followed it, pivoting from a career in finance to the front lines of health.

He recalls his conversion experience like this: "My friend spoke very passionately about Our Credo, about what it meant to him, and that was completely new for me, that was very refreshing. I think I was even kind of shaken. And that's ultimately what led me to join this company."

As for all of his success since then—what accounts for that?

"Many people took risks and bets on me over the years, and to be honest, in some cases, I'm really not sure why," Swami said with a wry grin. "But I’ve had the opportunity to move across all sectors of Johnson & Johnson, leading functions like IT, Finance and Supply Chain. I was exposed to different geographies and health systems in emerging and developed markets as well. Over time, I have learned to appreciate diverse perspectives, based on how people experience their world. That's absolutely been the key to my development and growth here.”

Joining Johnson & Johnson taught me to learn to be patient, to truly hear every voice around the table—and to leave space for what is unsaid, too.

Looking ahead, Swami sees analogies between data-driven changes in the way we approach human health and the data science revolution that is underway at Johnson & Johnson.

“When things go wrong with a part of your body, it has cascading and compounding impacts elsewhere," he said. "Your heart, your lungs, your digestive system—they’re all connected. An organization is the same way. That’s why we’re actively breaking down functional silos and democratizing data. We know that a single data set can have value and drive decision-making in so many different areas.”

Join Our Community of Data Scientists

Swami and other leaders at Johnson & Johnson will tell you we're rapidly accelerating toward an inflection point in data science—and that it could change the lives of people everywhere, including your own. But we're not quite there yet. To complete our mission and make the most impact, we to need to add some of the world's brightest minds and most compassionate hearts to our team.

"Right now, my sincere wish is that Johnson & Johnson does not rest," Swami said. "Successful as we are, we must continue to reinvent ourselves. When healthcare and technology come together in ethical and responsible ways, we can unlock truly amazing breakthroughs, driving better outcomes and patient experiences while lowering costs, too."

Ready to reinvent yourself right along with us, take on new challenges and be challenged to grow? Wherever you are in your career or in the world, check out all of the data science roles we're hiring for. And if you want to stay in touch—and get updates about jobs that might interest you in the future—be sure to join our Global Talent Hub as well.