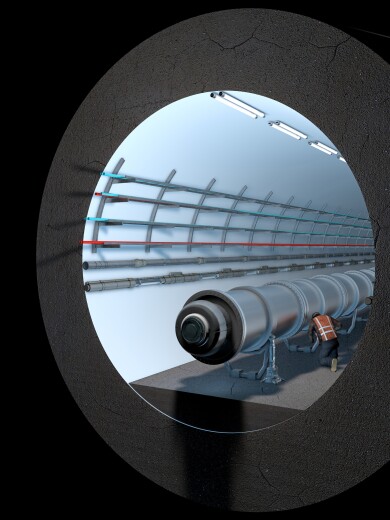 Particle physicist Jorge Chaves, Ph.D., spent nearly a decade in research settings—Cornell, UPenn, then the Large Hadron Collider in Switzerland—before joining our team, and while it might seem like a quantum leap to go from particles to people, his insights suggest it's anything but.

Jorge Chaves, Ph.D., is an expert in particle physics, the branch of physics that investigates the properties, relationships and interactions of subatomic particles, the smallest building blocks of matter.

Yet, at least in the course of his work at the Large Hadron Collider (which is, incidentally, the world's largest machine), Jorge was actually searching for something smaller, and still more elusive at that.

"I was looking for a totally new, undiscovered particle," Jorge recounted, adding, with a self-deprecating laugh, "and by the way, I didn’t find it."

On the other hand, his work certainly did uncover the many points of overlap and convergence between the disciplines of particle physics and data science.

As Jorge pointed out, "In particle physics, you're fundamentally working with big data.”

Through his work at the Large Hadron Collider—and later as a postdoc at Los Alamos National Laboratory in New Mexico—Jorge became fluent with various data science tools and applications. At the same time, he was rapidly developing skills in statistical analysis, data engineering and more.

Eager to apply all that expertise toward tangible outcomes and real-world impact, Jorge decided to pivot, leaving particle physics behind to take on a data science role with Johnson & Johnson. And two years later, he believes the seamlessness of his transition only underscores the degree of overlap between the two fields.

When you have thousands and thousands of particles, naturally, you’re going to be kind of interested in the ones that are a little bit different.

Changing the Lens From Particles to People

We always welcome people with unique backgrounds on our team at Johnson & Johnson, and Jorge's is now enabling him to take potentially transformative approaches to workforce management.

As he explained it, "One way of analyzing particle data is to seek 'outliers'"—or data that doesn't conform with the rest—"because when you have thousands and thousands of particles, naturally, you’re going to be kind of interested in the ones that are a little bit different."

The idea dawned on Jorge: Could we identify human outliers—people who have unique talents or untapped potential—in a similar way, using a combination of workforce analytics and data science?

Today, he's actively answering that question, but it's certainly not the only novel way Jorge’s driving impact. A few other projects he’s been involved with:

Alongside our large community of data scientists at Johnson & Johnson, Jorge also recently participated in our inaugural (and all-digital) Data Science Hackathon. “We were looking at demand forecasting for our Johnson & Johnson Vision business," he recalled, "and it was fascinating to have so many different disciplines all come together under the umbrella of data science to brainstorm and develop solutions."

Jorge added, "At this point, I'm just really excited to see what's next."

Make Jorge's Journey Your Own

Ready to see how your unique perspective and skill set, like Jorge's, can help us make a positive impact in the lives of people around the globe? Check out all of the openings in data science at Johnson & Johnson today, and be sure to sign up for our Global Talent Hub, too. It's a great way to stay in touch, learn more about life at our company and even get job updates about openings that might interest you in the future.