Megan McGrath is a global leader at Johnson & Johnson with a ton on her plate. Here's why being a military spouse has never stood in her way. 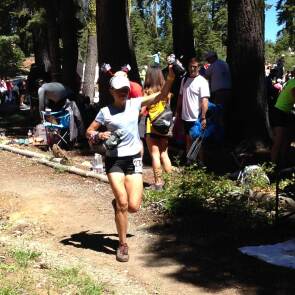 Megan finishes strong in the race that changed everything.

What is Johnson & Johnson doing to ensure that all members of the military-connected community, including military spouses, feel 100% at home?

We'll get to that. First, a bit of backstory: how Megan McGrath—Head of HR, Global Public Health, Lung Cancer Initiative and World Without Disease Accelerator at Johnson & Johnson—met her husband.

It's a romance to rival "The Notebook."

Rewind the clock a few years. Megan, a competitive runner, was preparing for her next big race, a 100-mile jag through mountainous backcountry. But she hadn't quite finalized where she would stay during the trip and said as much to a fellow runner. He replied fatefully: I'm sure you can stay at my brother's house. Jason lives nearby, but he's never there because he's in the Navy. Just shoot him an email to ask.

Jason, out of town for a deployment at the time, answered Megan hospitably enough over email. "I think he said like 'Yeah, no problem, you can stay at my house,'" Megan recalled, grinning.

Over time, however, this most innocent and utilitarian of correspondences grew into something else. "We just kept writing and writing," Megan said. 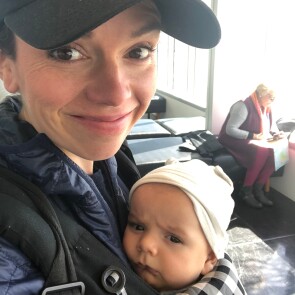 Megan welcomes a new life into the family (and makes good use of our parental leave policy at Johnson & Johnson).

As for the race, who cares? Months later, when Jason's deployment ended and his boat pulled into port, there was Megan. It was the first time they had ever seen each other in person.

And the rest is pretty much history—although there are a few important details, without which the story just might have turned out differently.

For one thing, even after Megan and Jason's relationship got off to the races, they had to do the long-distance thing for a while, with Megan in New Jersey, Jason in Virginia.

After eight months of dating, however, Megan decided it was time for that to change. She drew up a business case and presented it to her manager.

"I explained that even though I was supporting global teams of engineers and scientists, and even though I was traveling a lot with leadership teams, you know, I really could do all of that work remotely. I made the case that it was possible for me to live and work in Virginia Beach, and to continue to travel to support the business as needed.'"

Her manager agreed. Megan joined Jason in Virginia Beach. Today, the pair are happily married and have two young children at home. 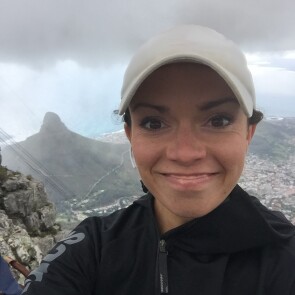 Megan at the summit of Table Mountain during a work trip to Cape Town, South Africa.

"While growing in my career with Johnson & Johnson," Megan reflected, "I'm thankful to have had the flexibility to relocate in order to be with my husband, since he has zero flexibility about where he's based."

"Everyone at Johnson & Johnson Has My Back"

Of course, the full story of this very busy, very successful professional who also happens to be a military spouse isn't quite that simple.

For starters, Megan has had to deal with challenges—emotional, practical and otherwise—that people outside of the military-connected community don't.

Deployments are a case in point.

"If your husband goes on a six-month deployment," Megan pointed out, "that's effectively like becoming a single parent overnight."

Fortunately, her colleagues have consistently stepped up to the plate to help. "My coworkers have been great," she said. "Whether that means giving me greater flexibility with scheduling because, hey, I have to pick up the kids right now, or just making sure that I have a few days off when my husband returns from a deployment. I've always felt like everyone at Johnson & Johnson has my back." 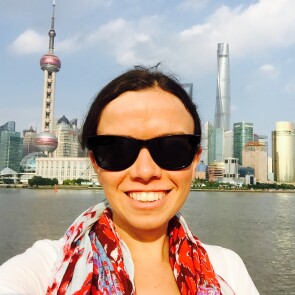 Megan takes in the sights during a work trip to Shanghai.

One memory stands out in particular for Megan: "It was, oh, maybe the first week of a long deployment for Jason, and things still felt pretty raw for me, but I was in charge of leading this very senior team on a trip to Cape Town, South Africa. I remember one night, while a few of us were out to dinner, I couldn't help but open up to the group. I said, 'Look, this is really tough for me. I've got a six-month slog ahead of me.' And right away, the whole table rallied around me. They made sure I felt supported, and that I knew I could count on their support going forward to help get through this."

Today, Megan is more than repaying support like that in kind. She's an active member of the Veterans Leadership Council at Johnson & Johnson, our award-winning Employee Resource Group for the military-connected community, for example. And what's more, she also now serves as a mentor to other military spouses through our partnership with American Corporate Partners (ACP).

"I serve as a mentor to military spouses from all branches of the military who are transitioning into new careers or perhaps took time off from their careers in order to support their spouses and are now looking for guidance as they transition back," Megan said. "It’s a mutually beneficial relationship—definitely a two-way street. I feel like I’m learning as much from them as they are from me."

Hiring, developing, retaining and supporting military spouse employees is great for business and for the United States. Military spouses are highly educated, have diverse personal and professional backgrounds and are adaptable, resilient and entrepreneurial. Johnson & Johnson is honored to have these incredible military spouses on our team and contributing to our success.

Megan's story is one example of how we demonstrate our commitment to support military spouses at Johnson & Johnson. You'll see that commitment reflected in a host of ways: flexible work arrangements, the Military Spouse Employment Partnership (MSEP) we signed with the U.S. Department of Defense as well as the new benefits we're offering military spouses (80 hours of paid time off for military spouses who are going through a military move, relocation or deployment; the same applies to spouses of National Guard and Reserve Service Members who are on any longer activation).

Want to become part of the vibrant military-connected community at Johnson & Johnson? Check out all of the ways you can join forces with our team, and consider signing up for our Global Talent Hub, too. The latter is a great way to stay in touch, learn more about life at Johnson & Johnson and even get updates about jobs that might interest you in the future.