How We're Creating a Workforce Where Everyone Belongs

This month, senior leaders at Johnson & Johnson are marching step-in-step with the LGBTQ+ community—quite literally, at pride parades in London, New York and elsewhere—in order to show our support for the community and our commitment to doing what we believe is right. But we don't just celebrate and support our LGBTQ+ colleagues one day out of the year—we do it every day.

Whether we’re actively participating in recruiting events like ROMBA, the annual Reaching Out LGBTQ+ MBA and Graduate Conference, or offering employees benefits that truly support them, no matter who they are, we're going beyond diversity and inclusiveness to create a workplace where everyone feels they belong. How? Here are just two examples.

Empowering Employees to Realize Their Dreams

Johnson & Johnson has a strong tradition of supporting employees by offering amazing benefits, and it's a tradition that continues into the present. For employees like Stuart Todd, Senior Manager, Global Strategic Insight, that support has been a gamechanger. 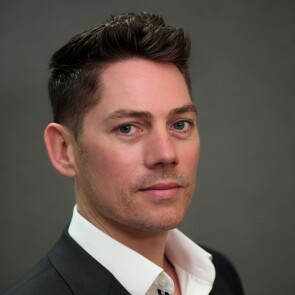 "As an openly gay man, it's been a lifelong journey to have children, and there were times when I thought it would never happen," he said. But after relocating, along with his husband and their beloved dog, from Australia—where the legal status of gay marriage remained uncertain—to the United States, Stuart began to think seriously about surrogacy. Except there was one problem.

"We realized that if we tried to do it alone—without the support of an organization—surrogacy was going to be cost prohibitive." So Stuart reached out to his manager at Johnson & Johnson.

"Right off the bat, my manager was supportive," he said. "He took me through the end-to-end process and showed me where to look for support." Soon, Stuart discovered that Johnson & Johnson offers assistance with fertility treatments, adoption and surrogacy to both heterosexual and same-sex spouses. Among the great employee benefits offered by Johnson & Johnson, Stuart discovered he would be eligible for eight weeks of paid paternity leave and have the freedom to take time off from work for doctor’s appointments.

"There was never even a blink of an eye when people realized I had a husband, and not a wife. It was not a problem at all," Stuart noted. "This is the first company I’ve worked with where there was never any hesitation when you’re talking about benefits and equity. Rather than having a kind of 'song-and-dance' routine, to have a normalized experience—that has been really powerful."

Stuart's daughter was born in December.

We Want Our Employees to Be Themselves

We strongly believe that all of our team members should have access to the same benefits. That’s why we offer equal benefits for partners in same-sex relationships, as well as a broad spectrum of benefits designed to enhance our LGBTQ+ teammates' quality of life.

For instance, we offer transgender-related healthcare benefits, including insurance coverage for hormone replacement therapy and gender-affirming surgeries, and we have unique transition guidelines in place to support employees who are considering transitioning.

In fact, such considerations are what made employees like Clark Musto, who recently transitioned from female to male, apply for roles with us in the first place. 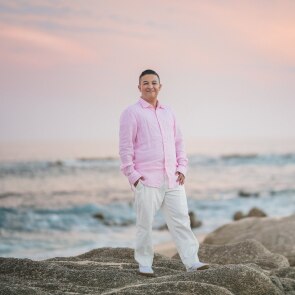 "I was completely unaware that programs like this—with transition guidelines in place—even existed," he said. "For the most part, the people I know who have transitioned have done so alone. Johnson & Johnson is the first company I’ve ever heard of where they’re holding your hand and supporting you throughout the process."

Clark said he was astonished by the thoroughness of Johnson & Johnson’s transition guidelines, which seemed to bring a host of factors—from insurance coverage to leadership buy-in, education and more—into perfect alignment. As a small example of that, Clark pointed out that many people who are transgender reject the names given them at birth in favor of their “true” names. And at Johnson & Johnson, the transition guidelines stipulate that, even if you don’t legally change your name, your name will nevertheless be updated across back-end systems to reflect your true name.

“When you’re trans, you’re asking everyone around you to change with you,” Clark explained. “You’re asking people to respect your identity by using correct pronouns and your true name. While transitioning is a personal thing, the guidelines make it possible to do so in a professional environment.”

As a newcomer to Johnson & Johnson, however, Clark said that initially he wasn't entirely sure how his decision to transition would be received by co-workers. "I had literally just started my job—I'd been here for three months when I decided I was going to start this transition," he said.

But for Clark, that turned out to be another pleasant surprise.

When he “came out” as transgender, he said, "I felt unyielding support from every direction, from HR, from a VP who said, ‘Congratulations!’ From everyone, the message was: 'Whatever you need, we support you.'"

Johnson & Johnson was founded in 1886, but that doesn't mean our values are relics of the past. Indeed, our commitment to groundbreaking innovation dovetails with our embrace of—and advocacy for—progressive social changes that we care deeply about. We know that if we want to stay around for another 130 years, we have to be flexible, adaptable and open to change. Those are key ingredients for the kind of leadership that can change the trajectory of health for humanity.

If you're looking for a workplace that's not only diverse and inclusive, but where everyone feels they belong and have a voice, check out all of the opportunities to join Johnson & Johnson today.