ay is Military Appreciation Month, and to mark the occasion, we caught up with one of our own who's currently serving. Lara, an IT Lead at Johnson & Johnson, is also an Infantry Platoon Leader First Lieutenant in the New Jersey Army National Guard.

Lara's inspiring story shows how many skills prized by the military—like leadership, teamwork and perseverance to overcome obstacles—apply equally to successful civilian careers at Johnson & Johnson.

"I’ve worked on some amazing things at Johnson & Johnson," Lara said, and she meant it. In fact, one project not only won her internal recognition—including a Janssen Scientific SPARK Award—but eventually took her business partners to the UK where the study’s abstract earned a poster presentation at the prestigious EULAR conference. 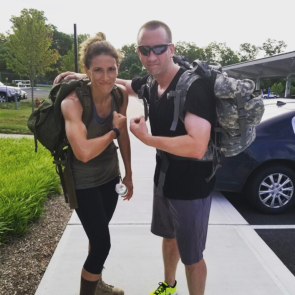 The project centered on a new mHealth application known as RA-RA (Remote Assessment in Rheumatoid Arthritis) that enabled clinicians to see how patients with rheumatoid arthritis actually experienced and managed pain throughout the day. The project, which Lara and her team launched in 2015, involved creating a first-of-its-kind app that allowed patients to register their subjective experience of pain. It then combined that data with vital signs, like pulse and heart rate, to give clinicians new insights into how pain is experienced, both mentally and physically.

What's more, the app demonstrated to clinicians what progressing through a care plan really looks like in real time. And the long-term goal? Leveraging the data to build predictive analytics—that way, if healthcare providers knew that an existing health condition was likely to worsen, they could strategically intervene to prevent it.

Our Commitment to Lara's Growth

Lara has progressed steadily during her career with Johnson & Johnson, moving from her initial role of IT Analyst and Project Manager to Senior IT Analyst and, eventually, IT Lead—the role she holds now.

In 2013, when Lara first joined the company, her role was in information management, primarily around threat awareness information management. She quickly began learning how technology works at a large company and the importance of strong infrastructure. She added, "Basically, I became proficient in how things work." Lara also noted that she owes much to Marene Allison—Worldwide VP of Information Security at Johnson & Johnson, as well as a Military Academy Liaison Officer and Congressional Coordinator for the State of New Jersey—for her mentorship.

In 2015, Lara joined the Technology Services Digital & Analytics team. There, she found a niche where she could utilize her academic background in clinical research psychology to partner with clinicians and help them create innovative solutions as part of the R&D process. From the outset, she said, “leadership sent me to a myriad of courses to gain fluency in technology—training in agile and scrum, software engineering and architecture principles, and even iOS programming languages.”

Beyond our commitment to her professional development, another thing Lara quickly discovered was that many of the skills she'd honed in the military dovetailed with her day-to-day responsibilities on the job. For example, there were situations in which different stakeholders seemed to "speak different languages," like the occasional disconnect between clinicians and technologists. But Lara's knack—cultivated throughout her military experience—for translating information so it clicks with different groups made her an excellent fit.

She also noticed that the skills she's gained here have helped her become a better leader in the military. "I've definitely improved my command presence," she said, "and I'm not afraid to express the need for improvements."

How Our Benefits Made All the Difference for Lara

Even before joining Johnson & Johnson, Lara was impressed with our amazing employee benefits—for instance, the fact that employees enlisted in any branch of the U.S. Military Reserve or National Guard who are called for training or active duty still receive their full salary and benefits, like healthcare coverage, for up to 24 months. Indeed, this tradition began, in part, nearly 120 years ago during the Spanish-American War, when we continued to pay salaries to, and held positions for, employees who served in that conflict.

But it wasn't until Lara deployed for Infantry Basic Officer Leadership Course (IBOLC) training in Georgia, and her circumstances suddenly changed, that she really grasped the value of those benefits. "I nearly tore my meniscus," she recalled, "and that meant I could have been at risk of getting dropped from the program. So right away, I knew I couldn’t go to an on-post clinic, because they're really cautious and risk-averse," she said.

"So I went to an off-post clinic. They did an MRI, gave me a quick cortisone shot and a good brace, and I was well enough to continue with the training. I wound up finishing fifth out of 176 officers. That never would have been possible—I never would have gone to an off-post clinic and potentially spent thousands of dollars out-of-pocket—if it weren't for Johnson & Johnson's continued healthcare coverage."

Johnson & Johnson gets it right when it comes to treating service members. They talk the talk and walk the walk—from the leadership on down.

A Rising Star—With a New Mission

For Lara, the good news just keeps coming. "Last year, I was selected as the first female in the National Guard to become an infantry officer—a result of a change in policy two years ago, when the military designed a program to integrate women into combat arms," she explained.

"I went on to Ranger School from there, which meant I had to take leave from Johnson & Johnson. But the company's leadership supported me, checked in with me and let me know they had my back and supported what I was doing. It was a great honor."

Now, Lara is gearing up for her latest deployment, this time to the Horn of Africa, at a naval base in Djibouti. She's heading there to lead a platoon that will provide area security and support the missions of joint-force operations in the region.

"Because of how sophisticated and supportive Johnson & Johnson's leave policy is, it’s made leaving much more comfortable," Lara said. "I know I have a home to come back to."

In addition to active service personnel like Lara, we're also incredibly proud to count so many outstanding veterans—including Courtney B., President, Janssen Neuroscience at Janssen, Inc., part of the Johnson & Johnson Family of Companies—among our ranks.

If working for an employer that honors and supports America's men and women in uniform is important to you, check out all of the ways you can join us today.