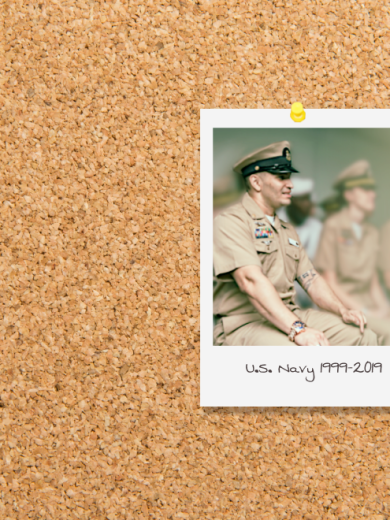 When U.S. Navy veteran Danny neared retirement age, the future looked to him as vast and open as the ocean from an aircraft-carrier deck. Since then, his leadership skills and military background have proven to be the key combination for a successful civilian career with Johnson & Johnson. Follow Danny's journey for insights on how to join him on our team today.

Danny enlisted in the U.S. Navy back in 1999 for what he calls “the typical reasons'': money for school, eagerness for adventure and a desire to serve—all of which paid in full. Along the way, he picked up a pretty specialized technical skill set, too.

“I received extensive training on how nuclear power plants work and operate,” Danny recounted. And to fortify that training, he earned a bachelor’s degree in nuclear engineering and a green belt in the process-improvement methodology Lean Six Sigma as well.

This being the U.S. Navy, of course, there was immersive, hands-on learning, too. A lot of it.

First, Danny had to prove himself at various military-operated power plants around the U.S. Next, he shipped off to work on a private-sector nuclear power plant. Finally, he was allowed to ply his trade on aircraft carriers themselves.

“I spent a good amount of time in the shipyard,” he said.

With good reason, too: You might not know it, but all 11 of the U.S. Navy’s aircraft carriers are nuclear-powered ships, equipped with nuclear reactors that are distinct from the kind used in land-based nuclear power stations. Danny’s technical expertise, in other words, was absolutely mission-critical. 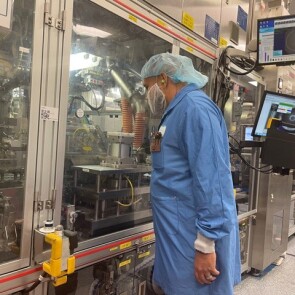 Danny on the floor of the enormous Johnson & Johnson Vision manufacturing site in Jacksonville, Florida

Some years later, with military retirement eligibility fast approaching, Danny realized he had no idea what to do next. As he put it, “The only thing I knew for sure was that I had to find a career that would allow me to spend more time with my family.”

So he started looking around, even interviewed for a few engineering maintenance gigs. Nothing really resonated—the jobs were fine, but they didn’t connect with Danny’s sense of mission and purpose. That is, until someone suggested he check out the manufacturing site operated by Johnson & Johnson Vision in Jacksonville, Florida.

Setting foot inside the sprawling facility—it covers 11.5 million square feet of real estate and makes more contact lenses than just about anywhere else on earth—had the force of a revelation for Danny. “Maybe 10 minutes into the tour, I could just tell. I remember looking around and thinking, ‘Wow, this is… awesome!’”

Hired in 2019 as a regulatory engineering technician, he was soon promoted to a supervisory position—meaning that Danny, who had himself started wearing contact lenses as a teenager, would now oversee their manufacture. And with a 57-person team to look after, too, Danny realized right away he would need to lean heavily on the leadership skills he had built as a U.S. Navy Non-Commissioned Officer.

I remember looking around and thinking, ‘Wow, this is awesome!’

The Keys to a Successful Transition

How a Lieutenant Colonel in the U.S. Air Force Found Her Second Calling

Interestingly, despite being the beneficiary of such highly specialized technical training during his tenure in the U.S. Navy, Danny thinks that’s only part of the takeaway from his service. 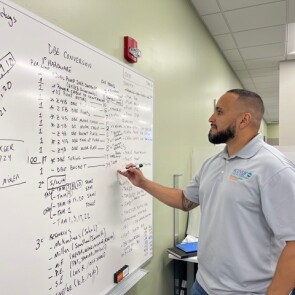 “My time in the U.S. Navy gave me the toolkit and the technical know-how to be successful in my civilian career with Johnson & Johnson, for sure—I mean, it helped a lot," he said. "But my ability to lead people, whether it’s a junior person in the service all the way up to someone senior, is what has really made the most difference in terms of my progression in my civilian career.”

Conflict de-escalation. Crisis resolution. The patience to coach and mentor. When you’re trained and entrusted to lead—and to lead, in the case of Danny’s final year with the U.S. Navy, roughly 300 active-duty personnel—these are things you’re built to do.

What’s more, it’s unlikely that Danny will miss the culture of the military at his new company, not least because it’s all around him. “A huge proportion of the people who are running the operations at our Jacksonville site are U.S. military veterans: Army, Navy, Air Force, Marine, Coast Guard, you name it. We’re all here.”

We’re both honored and privileged to have so many amazing service members and veterans on our team in Jacksonville. They’re mission-focused, service-oriented and deeply motivated by our mission of changing the future of health. Plus, they have a built-in understanding of leadership and team dynamics that positions them for success from the moment they join our team.

Simply from a logistical standpoint, overseeing “continuous ops,” to borrow a phrase of Danny’s —meaning that the Jacksonville plant is churning out contact lenses 24/7—probably doesn’t allow for much in the way of work/life balance, right?

Wrong, as Danny explained. “I have plenty of time now to spend with my kids, to go to their graduations, for example, and to just really be there as a part of their lives in a way I never did before. In the service, you have to realize that there were times when I wasn’t able to see my wife or kids for months at a time.”

The contrast is stark: “Now, if I have something important to attend to outside of work and it happens to fall on a workday, that simply isn’t a problem. Everyone at Johnson & Johnson is very understanding.”

Above all, Danny says he’s found a service-oriented culture in his new career that’s distinctly familiar from his earlier one.

“Everyone at Johnson & Johnson is coming at you from this perspective of, ‘How can I help you? What tools can I offer you? What can I do to empower you?’ There’s unusual openness here among management and peers, and nobody is coming into work angry or upset or dissatisfied. The people here want to come in every day because they’re committed to doing something productive that benefits others—and doing it well.”

All service members have a keen understanding of what it means to be on a mission. They know that sometimes the mission is going to be hard or require you to make decisions that really tug at you. The values in Our Credo at Johnson & Johnson—our commitments to our patients, employees, communities and shareholders—are perfectly in line with that.

If so, then like Danny you’ll discover that there are abundant opportunities to build your career in manufacturing with Johnson & Johnson—and that the skills you developed in your military career make for the perfect foundation. In fact, we’re the “Official Healthcare Sponsor” of Heroes MAKE America, an initiative launched by The Manufacturing Institute to connect the military community with opportunities in manufacturing, for this very reason.

Check out how you can join Danny on the Johnson & Johnson Vision team in Jacksonville, and be sure to explore all of the different ways you can join our military-connected community, too.

Finally, you should also consider signing up for our Global Talent Hub. It’s a great way to stay in touch, learn more about life at Johnson & Johnson and even get updates about jobs that might interest you in the future.