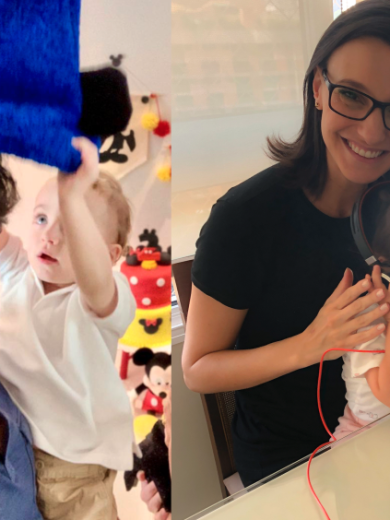 Many of us have had new coworkers of late—and these little ones not only have their own ideas about priorities, but real power to make a fuss.

Find out from three Johnson & Johnson colleagues in Brazil. 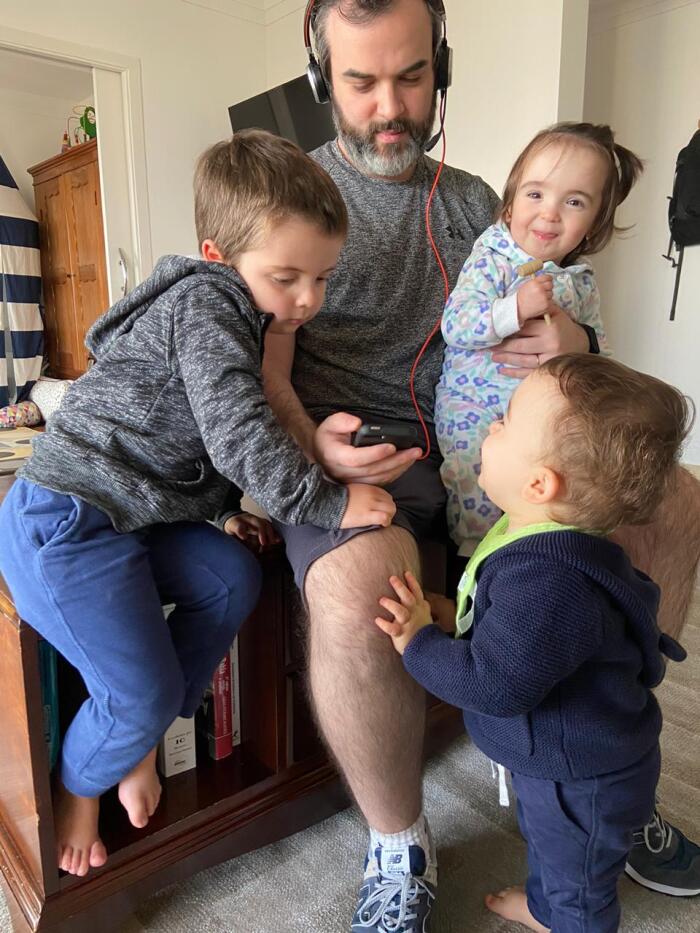 Everyone knows I have triplets. The team always asks how I’m doing—they're very caring and attentive to my needs. It's been great during this time to see all of my colleagues at Johnson & Johnson support me.

For Senior Finance Manager Fabio Scheliga, quarantine parenting comes with a built-in numerical challenge: "My biggest challenge is having four children. My son is three-and-a-half and my triplets are one-and-a-half. Balancing my work environment with all the responsibilities I have...", he trailed off.

Quickly regaining his footing, Fabio continued: "My manager and direct reports are helping a lot. Sometimes I delegate up to my manager, sometimes I delegate down to my team. But we all have different challenges, and we must be flexible with one another right now to overcome our challenges."

Indeed, Fabio understands clearly the metric that matters most now: "My kids. I really need to be there for them. This is an important time for them." What's more, because Fabio's triplets were born three months prematurely, they require special attention, which he views as a blessing. "Being with my daughter during therapy sessions is a joy,” he said. “Seeing my boys walk for the first time—these are the things I probably would have missed out on going to the office every day.”

He also appreciated the fact that, compared to his wife—a university professor who is now teaching her students online—his work-from-home transition has been relatively frictionless.

"She's had to adapt a lot," he said. "Fortunately, for now, a lot of the classes she's teaching are in the afternoons or at night, which means we can cover different shifts with our kids. But we really need to plan out entire weeks in advance and coordinate our schedules."

Sometimes, of course, there are gaps. "In those instances, I just take one of the kids, or several of them, with me into the virtual meeting," he explained. It helps that his colleagues are so supportive, too.

Being with my daughters during therapy sessions is a joy, seeing my boys walk for the first time—these are all things I would have missed by going to the office every day. 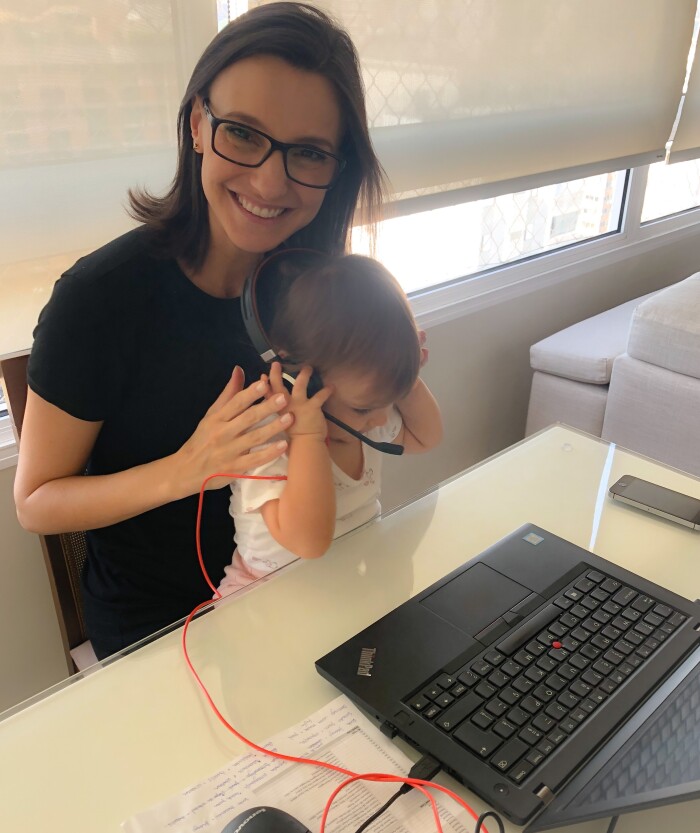 The routine is to be more tired than usual, but hey, it’s priceless to have lunch together!

Like most families when quarantine hit, Camila Thiago Zanardi, her husband and their two-year-old daughter hunkered down and did their best to adapt. Camila recalled: "At first, I really needed to reestablish the basic routine with my daughter. I had to adjust to being a mother at home while also being a strong employee for Johnson & Johnson." Striking the right balance was "a bit messy at first."

For example, Camila noted that work jargon had started seeping into her domestic life. "Suddenly, I was thinking like, 'I have my own work agenda to deal with, but then there's my husband's agenda, my daughter's agenda...' So many agendas!", she said, laughing.

But a week or so in, Camila had developed a solid routine. "Now, I block time on my calendar to be with my daughter. During lunchtime, for example, I want to give her lunch. But in order to do things like that—things that I want to do—I have to be organized. I think that planning and organization have become more important for all of us."

And Camila thinks her daughter was aware of the change as well. "I think my daughter’s getting used to the idea that her mom is sometimes unavailable during the day, even though I'm physically at home. While I'm working, she’ll often sit near me and play with a doll. It's as if she's thinking, 'Well, this is a little bit better. At least we're closer together.'"

Such attentiveness of her daughter's subjective experience led Camila to a fairly profound insight about how children generally might interpret parents' working from home during COVID-19: "I think it's showing my daughter that we—all of us, all of the time—are playing different roles. And to some extent she'll have to as well. I think that lesson could be important for her, and valuable for her in the future."

In the shorter term, in any event, Camila's daughter will have some new play partners, as Camila recently learned that she's pregnant—this time with twins.

It's been a really positive moment to be at home with my family. It’s not always easy, but it also isn't such a 'heavy' thing. Everyone in my immediate family is safe, and that's a good thing. We're very fortunate.

Being in Multiple Places At Once 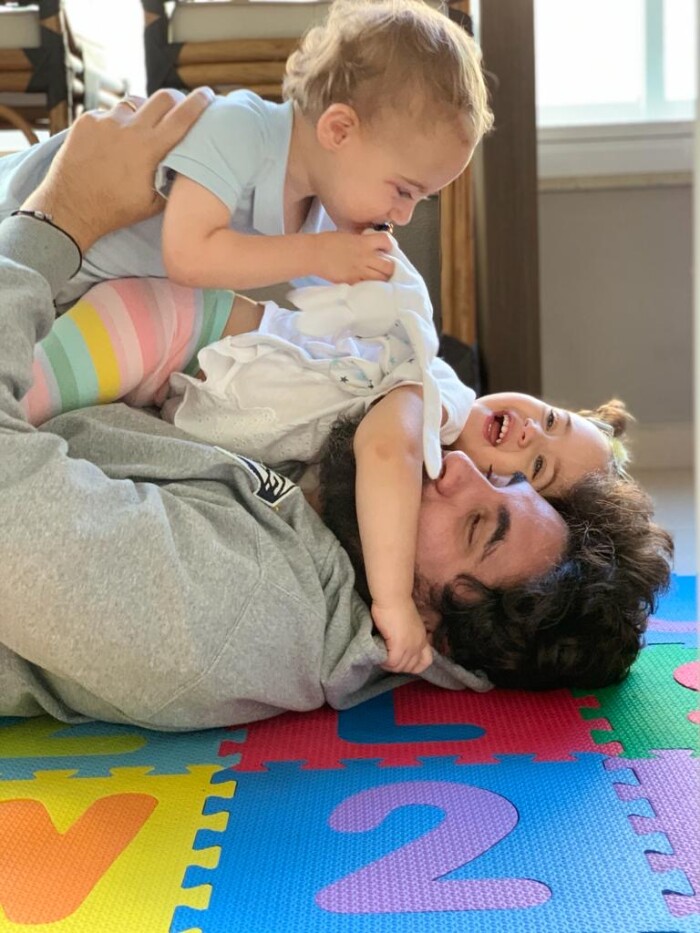 The four of us were living in a three-room apartment, for three months, without leaving. Think about that! It was impossible!

Luiz Arthur Fernandes, Head of Sales, Key Accounts and Cash&Carry, has two-year-old fraternal twins, a boy and a girl. When shelter-in-place orders and restrictions went into effect, the family coped well enough at first. Slowly, however, for the four of them, being cooped in a three-bedroom apartment started to feel a bit confining.

So they took action.

"At this crazy moment, we decided to move!", Luiz said, laughing as he recalled the situation. "I mean, the four of us, we were living in a three-room apartment, for three months, without leaving. Think about that! It was impossible. So we rented a house, just for two months, at first, to see what it was like."

Time will tell, but so far, so good, for both parents and children alike. "My kids, they can go run around now, get outside, exercise, do different things," Luiz said. (Like a lot of parents, he was worried they were watching too much TV.) And with the upgrade came the in-laws: Luiz's mother- and father-in-law moved in.

Such a move required fairly elaborate preparation in advance, as Luiz explained. "During the three weeks prior, we didn’t leave our house, and my in-laws didn’t leave their house. We all self-quarantined. It was the only way we could be sure that we weren't going to spread the virus, since we were planning on cohabitating."

Despite the additional hands on deck, work life for Luiz still brims with moments that seem lifted out of a situational comedy. A recent episode culminated like this: "I really didn't have any choice—I simply had to change the diaper in the middle of a Skype meeting!"

There's also the daily, Schrödinger's cat-like riddle of convincing his children that he inhabits multiple states of existence simultaneously. "I keep trying to explain to my two little ones that I’m here, yes, I'm in the house, yes, but I’m not actually here. I'm unavailable. I can’t play right now. I'm at work." The little ones have been understandably skeptical on this point. “I don’t think they understand that yet,” Luiz concluded.

My kids are absorbing a lot, I think they're even talking a lot more, and forming complete phrases, now that I’m here all the time. So it's a big pleasure, and a big challenge. The size of the pleasure is about the same as the challenge.

Ready to join a company where you'll be supported by best-in-class family benefits and colleagues who always have your back? If so, be sure to sign up for our Global Talent Hub. It's a great way to stay in touch, learn more about life at Johnson & Johnson and receive updates about jobs that might interest you in the future.