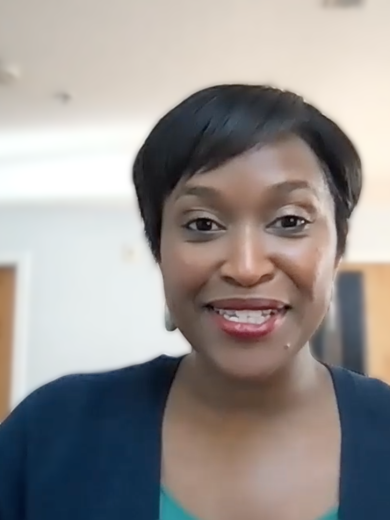 Kizzy Vassall, Head of HR, Enterprise Data Science at Johnson & Johnson, is bringing to life our diversity, equity and inclusion agenda today. To see how she’s doing it, follow her surprising journey to our company—and find out how you can join her, too.

“Diversity, equity and inclusion,” Kizzy began, “these are actually values in Our Credo”—the north star guiding everything we do at Johnson & Johnson.

And when you belong to a community organized around those values, as Kizzy went on to explain, the difference is tangible. It’s something you can feel.

For me personally, as a woman and as a Black woman, Our Credo means I can bring every aspect of who I am to work every day. My gender. My culture. My ethnicity. My Southern twang that might come out sometimes. Everything that's 'Kizzy' is strongly encouraged. You don’t have to hide anything here. We want you to be who you are when you join Johnson & Johnson.

A veteran of Google, Kizzy has been with Johnson & Johnson for five-plus years at this point and says she’s seen our culture of inclusiveness manifested in many different ways. Still, the events of last summer —when long-overdue conversations about racial injustice took center stage in the national discourse—stand out.

“With everything that was going on, both in the United States and around the world, seeing what my colleagues were doing, the conversations they were having, and the way people were reaching out to me to say, ‘Kizzy, what can we do as an organization about this? What can I do? How can I contribute to help make this situation better, and to make society better?’ That really meant a lot to me.”

Kizzy continued: “Later, seeing how our CEO Alex Gorsky and the executive committee were actually taking action and putting plans in place, I felt like I was seeing Our Credo in action in real time. The organization stepped up to say, ‘We’re going to do what Johnson & Johnson does best. And we recognize that we don’t have all the answers’—because, there’s still a ton of work that needs to be done around racial injustice in society. But overall, I think that was one of the most poignant and meaningful experiences I’ve had with the company so far.”

Today, as Head of HR, Enterprise Data Science at Johnson & Johnson, Kizzy sees the concept of “diversity” being applied in the context of data science in at least two ways.

Walking the Walk: Increasing Diversity in Leadership at Johnson & Johnson

The first? “We’re doing everything we can to promote greater diversity in STEM careers. An example of that—and one that I’m particularly proud of as an alum of Howard University—are the partnerships we’re seeking to develop and strengthen, not only with Howard but with other historically black colleges and universities, too. While we already had some partnerships with these and other schools in place, what we’re doing now is going even deeper. We’re focusing our efforts to encourage diversity in STEM career paths, and we want to tap into the amazing potential there.”

Plus, for candidates considering career opportunities in data science at Johnson & Johnson, Kizzy pointed to a second sense in which the concept of “diversity” applies. That is, given the unmatched size and scale of Johnson & Johnson—we’re the world’s largest broadly based healthcare company, after all—you'll find an unmatched range of opportunities to grow in your career when you join our team.

“You can come here and have eight or nine or ten different careers,” Kizzy explained. “You can have a global career. You can work across different sectors. And you can do all of it without leaving the company. We’re also rolling out new tools to empower our data scientists to make decisions about their career paths—to help them navigate, find the right opportunities and grow in their careers.”

The people who join our team come from all parts of the world, and all walks of life, united by their uncommon drive, sense of purpose and desire to make a difference in people’s lives. All things that are true of Kizzy as well.

But it’s also probably fair to say that, to a certain degree, her journey to Johnson & Johnson was in her DNA. As Kizzy explained: "My mother actually worked for Johnson & Johnson in the late '60s and early '70s, and she had all of these really fond memories of the organization. She talked about how, as a manufacturing employee, she was always treated with the utmost dignity and respect. So I grew up hearing really positive stories about Johnson & Johnson.”

As for Kizzy, having earned an undergraduate degree from Howard, an MBA from Wharton and a master’s degree from Cornell, she was thinking about her next career move. That’s when her mother really turned up the dial. “She started casually slipping specific things about Johnson & Johnson into our conversations. I remember she would ask me questions like, ‘You do know they have great opportunities at Johnson & Johnson, right?’ ‘Have you considered a career at Johnson & Johnson?’”

Perhaps, more than the sheer fact of her mom’s persistence, it was the historical context surrounding the words that she used. Dignity. Respect. Here was a Black woman who, even 40-plus years later, recalled the experience fondly.

Now that might be worth checking out. Kizzy wondered if there was something unique about Johnson & Johnson, after all.

“My mother’s perspective on the company and what Our Credo meant to her really stuck with me,” she said.

Thankfully, through the good works of Kizzy and her colleagues around the world, both perspective and practice are very much alive today.

If you’re looking for a career where you’ll take on new challenges, be challenged to grow and always be welcomed as your authentic self, we want to meet you.

Kizzy also had a bit of advice to share with potential candidates: “Try to find a company that aligns with your values. That way, even on the worst days—because there will be bad days, not every day can be perfect—no matter what happens you’ll feel good about yourself, and you’ll feel proud of the work that you’re doing.”

Join us. Be yourself. Help change the future of health for good. Check out all of the roles in data science we’re hiring for today. Plus, be sure to sign up for our Global Talent Hub, too. It’s a great way to stay in touch, learn more about life at Johnson & Johnson—and even get updates about jobs that might interest you in the future.