"The Platform to Speak My Truth": Inside TEDxJNJ
Back before the pandemic hit, Jerome Johnson Jr. delivered a sensational presentation at one of our TEDxJNJ events. His story illustrates how these unique events not only bring people together, but challenge them to grow. Read More

"The Platform to Speak My Truth": Inside TEDxJNJ
Back before the pandemic hit, Jerome Johnson Jr. delivered a sensational presentation at one of our TEDxJNJ events. His story illustrates how these unique events not only bring people together, but challenge them to grow. Read More

ealthcare has improved by leaps and bounds over the last century. From the relatively primitive operating rooms of the late 19th century, to advanced treatment centers of today that are bioprinting knee meniscus tissue, Johnson & Johnson has been there from the beginning.

Today, helping people heal and improving access to treatment—whether that means reaching out to underserved communities in the U.S., or providing treatment for tuberculosis in India—remain top-of-mind at Johnson & Johnson, but these commitments are also a foundational part of our heritage. Read on for three breakthrough examples.

The operating rooms of the 19th century were a far cry from today’s sterile and controlled environments. The causes of infection were not understood until the 1860s, and even then, it took years before surgical practices caught up. Surgeons of the day operated in their street clothes, and did not wash their hands and equipment between operations. They also often used scraps of raw, untreated cotton from the floors of cotton mills as bandages during surgery, largely due to a lack of viable alternatives, with predictable results: Surgery-related infections were common, and patients often died as a result.

But after attending a lecture by English surgeon Sir Joseph Lister on sterile surgery in 1876, Johnson & Johnson co-founder Robert Wood Johnson was inspired to create a safer, cleaner way for surgeons to dress wounds. He and his brothers founded Johnson & Johnson in 1886 to make the first mass produced sterile surgical dressings and sterile sutures. The company also pioneered the first absorbent, sterile cotton for use in the care of wounds.

Ultimately, we decided not to patent this simple, innovative surgical tool so that it could be widely adopted by surgeons and hospitals everywhere. This not only helped set hygienic standards, but also greatly reduced loss of life from antiseptic surgery methods.

Railway workers in late 19th century America confronted extremely dangerous conditions as part of their day-to-day jobs. They were often stationed in remote areas far from medical help, so an injured worker might wait hours, or even days, before receiving treatment. In fact, the frequency and severity of injuries to railroad workers led many railroad companies to keep surgeons on trains or on site while tracks were being laid—just in case. 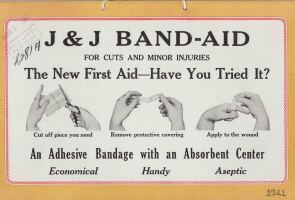 Robert Wood Johnson spoke to one such surgeon during a trip to Colorado. After hearing about some of the challenges of caring for wounded rail workers in remote areas, Johnson had an idea. Why not create a portable railway emergency kit to help surgeons treat injured workers? Inspired, Johnson wrote to railway surgeons around the country to ask for feedback and input on a creation that would soon save the lives of workers nationwide.

Two types of kits were eventually created: one for the railroads and one for general use. Just a few years later, Johnson & Johnson’s scientific director Fred Kilmer wrote the Hand Book of First Aid, which was included with these kits and taught many how to dress wounds safely and prevent infection. Today, there are few office buildings, restaurants or homes in which a first aid kit is not at the ready.

Just what people did with small cuts before the invention of BAND-AID® Brand Adhesive Bandages in 1920 may be hard for many of us to imagine nowadays. But you can thank the ingenuity of Johnson & Johnson cotton buyer Earle Dickson and his wife Josephine for the invention. 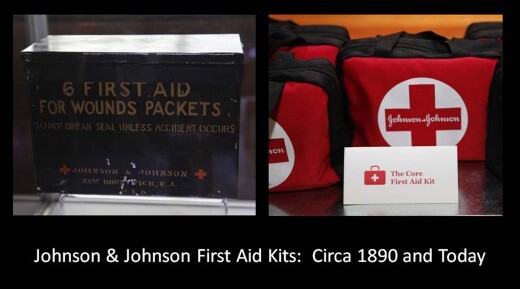 To help his wife, Earle fashioned the original BAND-AID® Brand Adhesive Bandage from a strip of sterile gauze placed lengthwise down the middle of a long strip of surgical adhesive tape, which could be cut as needed to form the first premade adhesive bandages. After netting only $3,000 in sales during its first year in production, a few tweaks to the size of the first model—and the millions shipped overseas for members of the armed forces during World War II—helped grow this simple brand into the household name it is today. Meanwhile, the humble bandages themselves have helped millions all over the world keep their wounds clean, covered and healing healthily.

We’ve been responsible for life-changing innovations in healthcare for more than a century, and while we're proud of that heritage, we're also looking ahead to moving the needle on pressing healthcare challenges today. And we need talented, driven professionals to make these innovations possible.

Ready for a role with positive impact on people’s lives around the globe? Apply today. We’d love to meet you.