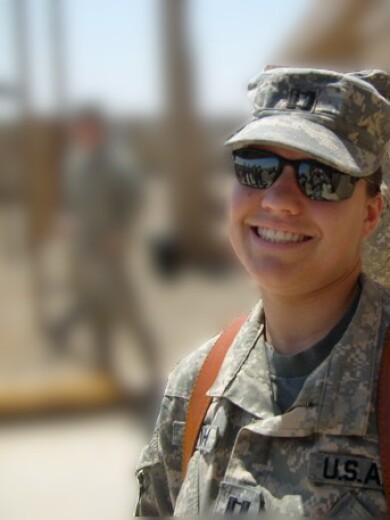 Deployments in Iraq and Afghanistan taught Abby how to make difficult decisions and lead teams under pressure—lessons she's applying today at Johnson & Johnson. Discover why Abby says, "I’ve had a very unconventional path, and I love it!"

Learning Leadership On the Fly

After graduating from college, Abby—psychology major, leadership minor—learned how to fly helicopters. No, really: After graduation, Abby, who had participated in Army ROTC as an undergrad, was commissioned and entered the Army's medical service corps. There, she joined the medical evacuation flight program and took to the sky.

That training ultimately brought her overseas for yearlong deployments, first in Iraq and then in Afghanistan. It was a formative experience for Abby.

"I was the senior-ranking American on a German post in a remote location in Afghanistan," she recounted. As such, Abby, with little direct oversight, was responsible for more than 20 soldiers, eight aircraft and millions of dollars in equipment. It was her time to learn leadership on the fly, so to speak.

I learned what it means to lead effectively, to represent something larger than yourself, to speak on behalf of your country or an organization.

In that capacity, Abby was absolutely mission critical, picking up wounded soldiers and transporting them to treatment centers where they could receive care. The work was extremely challenging, but she excelled at it.

Moving to the Private Sector—and Owning Her Story

As Abby's second overseas deployment in a combat zone came to an end, she was eager to change gears. She decided to take on an altogether different challenge: the private sector.

First, however, she'd have to overcome a dilemma many military veterans share: how to tell her story.

"I was struggling to frame my background, leadership experience and skills in ways that were relevant to a business setting," Abby recalled. "Because you can't just say, 'Look, I led soldiers in combat and managed millions of dollars in equipment overseas—obviously I'll be a great fit for your company.'"

Gradually, with time and a little practice, Abby honed her story until she felt like she owned it—or to put it another way, until she felt like she had made it her own. One key realization for Abby: "Whether you're doing chemical reactions at a manufacturing site or managing aircraft in Afghanistan, from a leadership standpoint they're really not so different. It’s about the team and the vision."

Abby landed a job supervising chemical manufacturing operations for Janssen Inc., part of the Johnson & Johnson Family of Companies, in Athens, Georgia. And after completing a six-month rotational program in a development role as a Senior Leader, her career was ready for liftoff.

Military Morals: What 8 Employees Learned From Serving Their Country

Recently promoted to the role of Senior Business Excellence Manager, Abby is happy to report that telling her story today is no problem at all. As she put it, "I’ve had a very unconventional path, and I love it!"

Plus, she’s gotten to see firsthand how her work translates to life-saving products and real-world impact. "In my role as Manufacturing Manager, we were producing approximately 75% of the world’s sutures—which is a lot."

While Abby's been working from home since early March due to the global pandemic, she continues to support teams whose essential work can’t be done off site. For her, it’s yet another lesson in leadership.

"Leadership is about trusting the experts and the highly capable people around you," Abby explained. "If I'm not the smartest person in the room, that's okay. But you have to own it. If something bad happens, I take responsibility for it. If something good happens, I give credit to the team. I'm committed to empowering everyone on my team and giving them a chance to shine."

Since joining Johnson & Johnson, Abby has also been involved with two employee resource groups—one focusing on women’s leadership, the other on military veterans—that she credits with contributing to the strength of her transition.

They appreciate my military background here, and we have a great community of veterans. We're all passionate about leadership, diversity and getting the job done. The values of Johnson & Johnson really align with the values of the military.

Join Our Community of Veterans Today

Plus, be sure to sign up for our Global Talent Hub. It's an easy way to stay in touch, learn more about life at Johnson & Johnson and get updates about jobs that might interest you in the future.