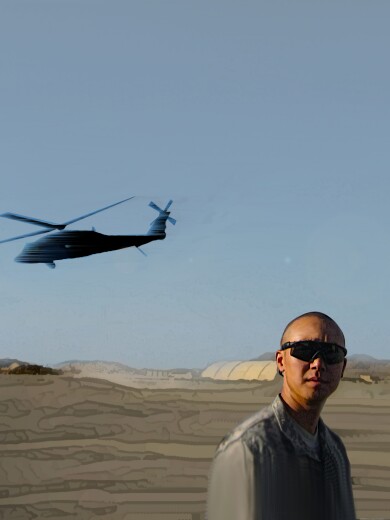 Put yourself in Dan’s shoes: It’s March 2021, and Dan, a U.S. Army veteran and Senior Clinical Account Specialist at Johnson & Johnson, has just married a U.S. Navy Lieutenant and Foreign Area Officer in the U.S. Navy. 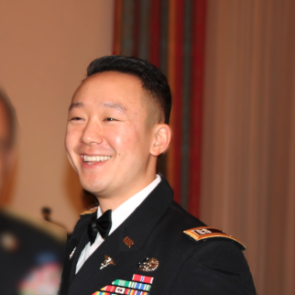 Our New Product Introduction (NPI) Trainer enjoying a lighter moment during his tenure in the U.S. Army.

“We were settling into this great new life together," Dan recounted. "We had a new house in California, we'd even adopted a rescue dog, and then—in the blink of an eye—everything changed."

Dan's wife was reassigned to Japan.

“It was surreal how fast everything moved at that point. You break your lease and pack up everything you just unpacked. Your last day of work is in May and in August you're moving halfway around the world.”

A whirlwind on so many levels, not least of all professionally. “In terms of my career with Johnson & Johnson, I really didn’t know what would happen next," Dan admitted.

You might be surprised by the answer as much as he was.

I’ve always wanted to help people—to make a difference and be a positive influence in people’s lives.

Flash back a few years: Dan is serving overseas with the U.S. Army as a Medical Services Officer. He's overseeing 30 medics that provide medical support to an infantry unit of about 700 soldiers, and goes on to work at a medical facility that treats wounded soldiers.

“I learned a lot about preparedness from that experience," he reflected. "For instance, the schedule changed all the time. At the drop of a hat, you could get the call: 'We have a patient on the table. Be here in 30 minutes or less.' You needed to be ready for action at all times."

And Dan proved to be a quick study in other areas as well—how to coach and mentor his peers, for example. He was eventually put in charge of operational and training management projects for more than 1,000 people. 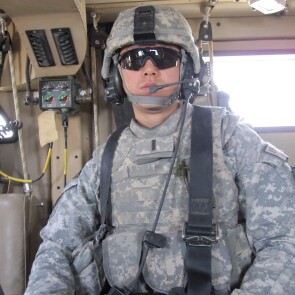 Dan Y. deploying overseas as a Medical Services Officer with the U.S. Army.

When he transitioned to the private sector, Dan found the perfect opportunity to apply that background in a unique role with Johnson & Johnson.

He explained, “In my position as a Senior Clinical Account Specialist, I provided clinical support for various electrophysiology procedures and helped identify and map these arrhythmias, so it was really hands-on work. Every day I would be in there with the staff and the physicians.”

Thinking back on his transition, Dan says he knew he was in the right place from the moment he showed up for his interview.

“Some of these interviewers at other companies were really aggressive, but with the team at Johnson & Johnson it was a completely different experience. It seemed like I was in the room with good people, the right people, the people I wanted to work with.”

More than seven years later, he still feels the same way, much as we do about Dan. Only his title and zip code have changed.

At Johnson & Johnson, we recognize that sacrifices are not only routinely made by service members, but by their spouses as well. In fact, that recognition is part of the reason we're a member company in the U.S. Department of Defense’s Military Spouse Employment Partnership (MSEP). It's also why we’re broadly committed to supporting military spouses in every way that we can.

So when Dan notified his manager of his wife’s pending move, what happened? Simple. We took deliberate action. We stepped up to support him. We designed a position for him with our colleagues in Japan.

Dan described his new responsibilities as “a hybrid between marketing and education.” 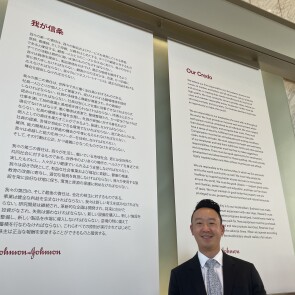 Dan Y. standing before, and for, Our Credo at his new headquarters in Japan.

“I’m sharing best practices from the U.S. with our Japanese team, while also working to support the launch of new products. Since I don’t speak Japanese, to provide clinical support in the way I had been in my previous role would be very, very, very difficult."

“While I always try to mimic what my peers are doing in terms of showing respect and deference to colleagues and customers, I think that my military experience helped a lot, because there’s such a clear and established hierarchy. You have traditional military customs and courtesies, such as properly addressing and saluting senior officers and officials, so I'm familiar with rank and order. The discipline and respect aspect isn't entirely new to me.”

What has been surprising, though, is the extent to which the move has been a boon for Dan professionally. That is, it's not only broadened his horizons in a literal sense, but opened up unforeseen opportunities for growth and development, as well.

"Now, I'm involved with multiple teams within marketing and education here in Japan and the greater Asia-Pacific region. I've already learned so much in such a short time by collaborating with colleagues and business partners spanning regions and time zones. The opportunity truly has been amazing."

When bad things happen in the military, the first thing you do not do is lose your cool. You keep your composure, assess the environment and make the best decision possible. I feel like that’s what I’m doing now at Johnson & Johnson. This is exactly what I signed up for.

Dan’s story is only one example of our commitment to supporting the career growth and development of military spouses, but why not see for yourself firsthand? Check out all of the ways you can join forces with Johnson & Johnson.

Before you go, sign up for our global talent community, too. It’s a great way to stay in touch, learn more about life at Johnson & Johnson and even get updates about jobs that might interest you in the future.