“Constant Investment in My Career”: How a 15-Year Johnson & Johnson Veteran Sums Up His Experience

“Every year that I’ve been at Johnson & Johnson, there’s been a constant investment in my career—and in me.” 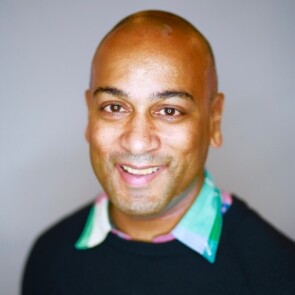 How and why did he move between so many roles? And what did he learn along the way? To find out, we caught up with Nigel and learned about his varied and fascinating career at Johnson & Johnson.

With Us From the Start

While earning his degree in computer science at Rutgers University, Nigel took part in the Inroads Internship Program with which Johnson & Johnson was involved. After that, his interest in the company was further piqued when one of his professors mentioned that Johnson & Johnson excelled at mentoring and developing leaders. So, following his graduation, he applied for Johnson & Johnson’s Information Technology Leadership Development Program (ITLDP).

One year later, while working for a tech startup and learning the ropes of the early internet, Nigel received a phone call. He learned that he’d landed a spot in the ITLDP—was he still interested? He was.

“I was surprised by the amount of responsibility I was given, and how very senior leaders, like SVPs and product directors, valued my input and web expertise even though I was low on the totem pole,” he recalled. “They were really willing to hear my perspective and trusted me to lead the IT side of a website launch. From there, things just started to grow.”

At each subsequent step in his career, Nigel continued to learn and develop with full support from his many mentors, coaches and sponsors.

Nigel noted that he’s worked with a number of terrific and inspirational leaders during his tenure here. One in particular lived by the phrase, “I’ve got your back”—a mantra that came to define how his team worked.

“To us, it meant that no matter how big our challenges were, he supported us,” Nigel said. “We knew we’d have whatever we needed to be successful because our leaders created those conditions and cleared the roadblocks.” Benefiting from this management approach year after year would shape Nigel’s own leadership style.

“It’s not always about telling someone exactly how to do something, but about being there for someone when they need you and urging them to aspire to accomplish more than they ever thought possible. I received a lot of that while at Johnson & Johnson. I was fortunate that they invested in me—both in terms of time and resources.”

He added that his team of mentors not only urged him to round out his technical expertise with more business experience, but also ensured that he had their full support to attend the MBA program at New York University’s Stern School of Business.

“I didn’t actually know it was possible. I didn’t see it for myself—other people around me saw it before I could and said, ‘You need to do this. You’ve earned it, and we’ll support you in your growth,’” he recalled, pointing out that this wasn’t the only way in which Johnson & Johnson invested in his professional development. The company also sponsored a variety of technical certifications, including training in product management, web development and software engineering and development.

This support shaped Nigel’s professional development, enabling him to bring a forward-thinking perspective to projects over the years. He remembers rolling out iPads and iPhones to the sales teams 10 years ago, for instance, when the technology was still new. He also helped launch the first episodes of “The Hernia Discourse,” an innovative podcast for hernia surgeons, in 2007. He even worked on early Johnson & Johnson e-commerce projects.

A Culture of Collaboration—and Inspiration

Nowhere has that been more clear to Nigel than in his work with Johnson & Johnson Design. “With novel, progressive projects like the Neutrogena Light Therapy Acne Mask,” he reflected, “we’re complementing traditional products with digital tools, services and data to make those experiences significantly better than they’ve ever been. We’re thinking about the product, the service and the apps, as well as the data behind it. All of these things are what help make up the entire ecosystem, and we use care-centered design to help design that ecosystem.”

When asked how the company has built and maintained such a positive, strong culture, Nigel explains that Johnson & Johnson hires character, and then trains people to further develop their skills. “And Our Credo—putting the needs and well-being of the people we serve first—guides everything we do.”