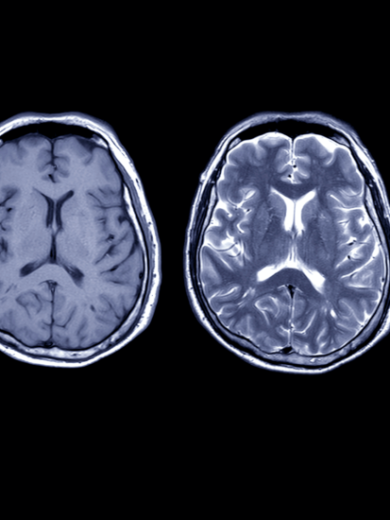 Discover how Tim Schultz, Ph.D., is applying advanced data science to help change the story of Alzheimer's disease—and how you can join him.

The Story Behind the Story of a Health Breakthrough

It's no accident that Tim Schultz is discovering insights that just might transform our understanding of Alzheimer's disease—a disease which affects as many as five million Americans, and for which there is no known cure.

For this data scientist, the mission is personal.

"My grandmother had Alzheimer’s disease—she had it for a long time," Tim recounted, "and to watch someone you know and love slowly, slowly fade away like that, it's just excruciating. So I wanted to somehow harness my feelings of pain, frustration and helplessness and do something good with them. I wanted to make an impact."

As a data scientist on our Janssen R&D Data Science team, indeed, Tim's doing exactly that. Learn about two breakthroughs he's recently been a part of, what brought him to the data science community at Johnson & Johnson and how you can join him there today.

The more Tim has learned about Alzheimer's disease, the more he's been struck by two things: "How much we know about it, and at the same time, how little we actually understand about the disease,” as he put it.

So "complex and multifaceted" is Alzheimer's disease, in fact, that Tim likens it to "a massively complex jigsaw puzzle, sections of which are in totally different stages of completion, and there are still gaps in our understanding of how all the pieces fit together."

Yet, as he digested more and more of the scientific literature, Tim was filled with a surprising sense of optimism, too.

"My own belief," he said, "is that lot of the information and insights we need are actually out there in the world already, but they're hard to access or visualize at the critical point of inquiry"—meaning, for example, at the moment our scientists are mapping out experiments or planning new studies.

Tim continued: "I started wondering whether it was possible to build a tool or platform that could surface things people hadn’t even thought of or considered before, and surface them quickly, at exactly the right time."

The short answer, condensing a bit of history, is yes.

The tool, which Tim has since successfully developed, can take wide-ranging information—risk factors known to be associated with diseases like Alzheimer's, compounds that may act on underlying pathways, and so on—analyze it and bring to light focused answers. In fact, this breakthrough innovation is already generating fresh insights for Tim's team.

"We’re using the tool right now to, as an example, gain clearer insights at the biomolecular level to understand the genesis of the disease well before signs of cognitive impairment surface," he said.

"Show Me Something Interesting": New Diagnostic Models for Alzheimer's Disease

That tool, which Tim presented to the community of data scientists at Johnson & Johnson during our inaugural Data Science Showcase, is only his most recent innovative application of data science in the context of Alzheimer's disease. Before that, by teaming up with cross-functional experts in the field, he also helped develop a new and far more precise way of classifying the progression of the disease.

"Categorizing patients with Alzheimer's disease according to the clinical severity of the disease had been the norm," he explained, “but the idea was to build a model capable of quantifying disease progression along a continuum. That made the signals"—the statistical trends—"from various cognitive tests, biomarker measurements and treatment models much, much clearer."

It has also allowed Tim and his collaborators to dial in on insights and impact. As such, it's a good example of what Tim calls the “show me something interesting” approach to problem solving, which data science makes possible. "If you want to discover something relevant, contextual, valid and completely non-obvious about a disease, and you're already an expert in that field, the data science methodologies we’re currently developing hold unique power to surface exactly that kind of information."

Now a Principal Scientist at Janssen R&D, Tim's first title with Johnson & Johnson was on a slightly humbler scale: intern. Back then, he was an undergrad at Penn State, studying information science and technology and playing rugby. After graduating, he came back for one of our leadership development programs (you'll find them on the CVs of many of our current leaders). Later, Tim returned again—this time while completing a Ph.D. in health informatics from Drexel University’s College of Computing and Informatics.

By then, it just made sense for Tim to fully join our team.

Around this time, Tim says he started to really grasp the transformative potential data science brings to healthcare.

"In my dissertation, I mined and visualized the clinical trial space of Alzheimer’s disease using publicly available clinical trial protocol databases," he explained, "and what emerged were literal 'clusters' of thought that over time evolved in very interesting ways. I was able to see how all of these really big-picture trends—trends in scientific approaches, in assumptions, in ideas—had been born, evolved, merged and died over different periods of time. It was eye-opening."

A sense of that transformative potential continues to animate Tim's work today. "It's just incredible how much impact on people's health you can have with a career here," he said. “The work is totally gratifying for me. It’s the work that I’ve wanted to do ever since I was in grade school.”

Join Our Community of Data Scientists at Johnson & Johnson

Want to expand your skill set—and positively impact the lives of people everywhere—by solving real-world problems in a supportive and collaborative environment? Find out how you can join the team of data scientists at Janssen R&D, or explore all the openings in data science available at Johnson & Johnson right now.

In the interim, be sure to sign up to join our Global Talent Hub, too. It's an easy way to stay in touch, learn more about the community of data scientists at Johnson & Johnson and even get updates about jobs that might interest you in the future.