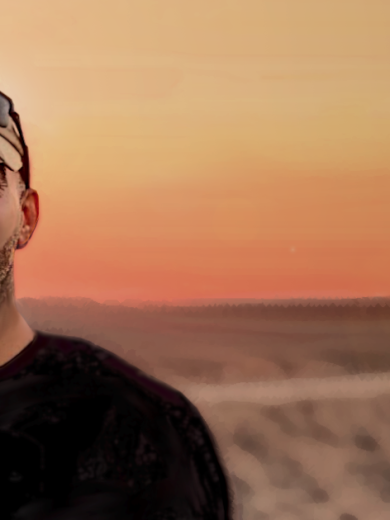 Follow Mazin's remarkable five-part journey from Iraq to the U.S. to find out why he joined us to help change the future of health.

Mazin was just your typical college student at the start of 2003.

A veterinary science major at Al Qadisya University in Iraq, Mazin hoped to one day become a veterinarian. "I really was just an average citizen," he said. 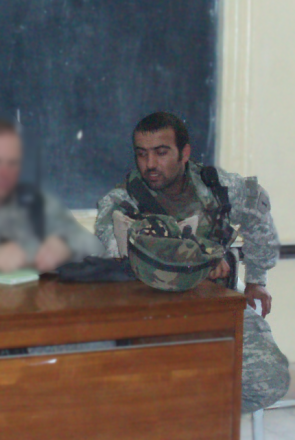 But with the start of the Iraq War in March, that sense of normalcy came undone. "I remember watching my country undergo this kind of transformation, from Saddam's regime to… we didn't know what."

Mazin wasn’t just watching; the fluent English speaker was listening, too. He noticed that interactions between coalition forces and locals were often translated by ordinary citizens—by people like him who happened to be on the scene. And even when trained linguists were on hand, they generally weren't familiar with Iraq's culture or the nuances of its dialects.

“A lot of people were arrested, or even harmed, because of miscommunications,” Mazin said.

After twice stepping in to prevent that from happening, Mazin resolved to do more. He applied to work as a translator for the U.S. Army and was accepted for the position. Things moved quickly from there.

By the time Mazin graduated from veterinary school in 2005, he was a full-time translator for the U.S. Army in Iraq.

You’ve probably heard someone talk about an event in their life as a “turning point” and understood what they meant, even if the change wasn’t black and white. 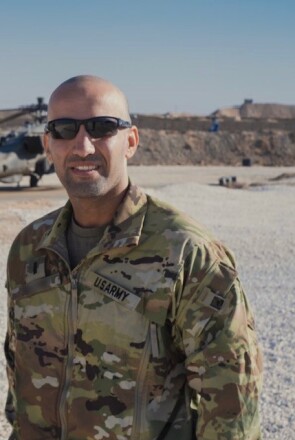 Consider, by contrast, Mazin’s experience: “Your face and your name and your identity are all out there exposed to the public, because it’s known that you’re actively helping the U.S. military in Iraq.”

His life was in danger. At all times. No matter what he did, on the job or off it.

And it wasn't just his life, too.

"There was no guarantee that you would ever be safe again, period, but the most stressful part was the danger that it put my family in," Mazin said.

Members of Mazin’s family became targets for insurgents and terrorist groups. Mazin, for his part, would seldom leave "the wire," or his military base, except to go on missions.

There, notably, he began to attract a different kind of attention.

Early on, for example, Mazin and five other translators were asked to go on a 45-day assignment. The mission, should they choose to accept: embed with U.S. military units that would provide security for Iraq’s first elections since the start of the war.

All five of the other translators declined. Mazin said yes.

“After that, my relationship with my unit radically changed, because they saw my performance, my commitment to the mission, my passion, and my willingness to help,” he said.

Later, as the unit embarked on longer missions in still more hostile areas, Mazin proved himself time and time again. He ultimately spent eight months as the unit's sole translator, cementing a powerful bond with the other soldiers.

"We became really close during that time,” he recalled. “It was like a family, and I'm still in touch with most of those soldiers today. They're the ones who helped me move to the U.S."

As Mazin’s unit neared the end of its deployment, he recounted, "They started talking seriously about the possibility of getting me a visa to come to the U.S. The unit’s commander told me that there was a new program for people like me, but it was only in its pilot phase, and you had to have several recommendations from generals in order to get it." 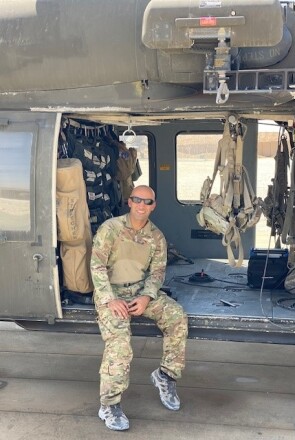 Mazin was interested, of course, but he didn’t want to get his hopes up. He thought: Recommendations from generals? How likely is that? Besides, he had his own family to think about.

"I'm a very family-oriented person,” Mazin explained, “so whenever I imagined my future, it always involved continuing to live in Iraq. Over time, I just thought, you know what? I'll put up with the risk and the danger. I'll just deal with it. It is what it is."

So he wasn’t at all prepared when he got the call from his unit’s commander. "He asked me, 'Are you about ready to come to the U.S.? Because your visa came through.'"

While Mazin was excited, he was flat broke, too. But the commander told him not to worry: His unit had stepped in to cover the cost of airfare. And with that, Mazin not only stepped on the next flight, but took his first steps into a new life.

When Mazin arrived in the U.S., he described his two primary assets as follows: “knowing English” and “knowing military lingo.” 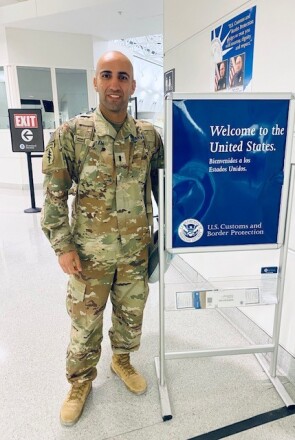 Which, he added, isn’t the same thing as “knowing how to live a civilian life.” Fair point.

“I had so many questions," Mazin recalled. "What’s a social security number? How do I order food in a restaurant? I had questions about things that most Americans take for granted. So it was a really big transition."

For the first three months or so, Mazin leaned heavily on the other soldiers from his unit for guidance and support. But, needing a paycheck, he resolved, “I have to start somewhere,” and signed up to work as a linguist again. He would go on to spend the next year back in Iraq, this time as a contractor attached to the U.S. Marine Corps.

After that, Mazin's mind was made up.

"When I got back to the U.S., I realized how mentally committed I was to being in the military and being a soldier. I loved everything about it and everything that I had done during my time with the U.S. Army. I finally felt like I knew what I needed to do."

Off to basic training Mazin went, and in 2010, at the age of 28, he graduated with Company D, 3rd Battalion, 34th Infantry Regiment—a soldier at last.

As fate would have it (with slight assistance from mutual friends), Mazin also met the woman who would become his wife on a military base in Alabama.

"My wife has been with me throughout this whole journey. She has gone everywhere with me. Our kids were born in Hawaii, for example, because it was my first active-duty station. She’s the rock of our family, and I'm so lucky to have her.”

After a few years of active duty, Mazin transitioned to the U.S. Army Reserves, where he trained as a cardiovascular specialist. It was a way to continue positively impacting people's lives, and it built on some of the medical knowledge he'd acquired as a veterinary science major.

Eventually, Mazin started exploring opportunities in the private sector. After interviewing with a few companies, including Johnson & Johnson, he said, "The choice was clear."

I'm constantly challenging myself, so I was looking for a company where I would be encouraged to develop and realize my full potential. That's why I chose Johnson & Johnson.

“Helping electrophysiologists provide the highest-quality care to patients” is how Mazin describes his work right now at Biosense Webster, part of the Johnson & Johnson Family of Companies.

“My work today, much like my career in the military, is mission- and service-oriented, and it’s making a difference in people’s lives,” he said. “It also builds on teamwork, collaboration, and decision-making capabilities that I developed during my time with the U.S. Army.” 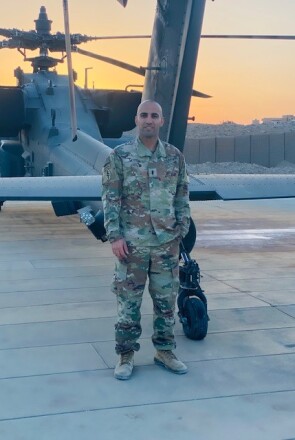 Clearly, he’s excelling at it, too, as he was recently promoted to the role of Regional Therapy Advancement Manager.

But one thing to note about that promotion: Right as it came around, Mazin received word that he would soon deploy overseas. To Syria. For nine months.

"I learned that I was going to be part of what the U.S. Army calls a Forward Resuscitative Surgical Team,” he explained. The 20-soldier team—a mix of surgeons, ER physicians and nurses—would be attached to units from the U.S. Special Forces and the U.S. Navy Seals, providing frontline medical care to wounded soldiers.

Naturally, Mazin worried the mission could jeopardize his promotion at Johnson & Johnson. But if it did, he was okay with that.

“I hesitated to go for the promotion," he recalled, “because my first thought was, 'I don't want to be promoted and then leave right away, that isn't fair to the team.' But every leader I spoke to at Johnson & Johnson pushed back. They said, 'You'll be supported during your deployment, and when you return you can pick up right where you left off.’ The amount of support and encouragement that I received here was truly phenomenal.”

Mazin continued, “Even after I left for the deployment, I kept receiving calls, texts and emails from colleagues at Johnson & Johnson. And any soldier or service member on deployment will tell you that these things mean the world to us."

Having that level of support helped Mazin serve his new country more effectively, too.

In his own words, "Being in battle is partly a mind game, and when you're mentally prepared, you're a strong soldier. For me, I knew that my family was taken care of, my financial situation was taken care of and I'd be going back to the same position at Johnson & Johnson. A lot of other soldiers, while they were dealing with the mission in front of us, big as it was, they were also applying for jobs and stressing out about stuff like that in the background. So I felt very fortunate not to have to go through that, and I feel even more fortunate now that I’m back.”

Ready to find out for yourself what best-in-class support for the military-connected community looks and feels like in practice? To join forces with people like Mazin and help lead positive real-world change?

Take a moment to learn more about our career pathways for the military-connected community, or start exploring all of the roles we’re hiring for today.

In the interim, you should sign up for our global talent community, too. It’s a great way to stay in touch, learn more about life at Johnson & Johnson and even get updates about jobs that might interest you in the future.