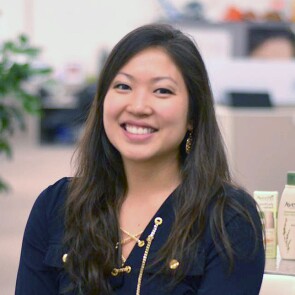 CES, the annual trade show in Las Vegas, is probably most famous for the litany of ambitious and often quirky technologies and inventions that companies trot out on the main stage each year. And at CES 2019, alongside flying cars, boxing robots and self-rolling suitcases, our very own Tara Zedayko was navigating the whirlwind of fanfare and flashbulbs, having a great time while making a major impact on the ground.

Indeed, she had a lot to do. A partial checklist from her trip might look something like:

What's enabled Tara to not only make the journey to center stage, but thrive there as well? It didn't happen overnight or accidentally, as we'll see. This is Tara's story, but it's also the story of how innovation happens—inside of our walls and out—and how you can make Tara's journey your own. In her own words, it's the story of how Johnson & Johnson "really believed in me and allowed me to soar."

The "Eureka!" Moment for Tara and Her Team

Behind all the much-ballyhooed product launches at CES are a thousand untold, though no-less-exciting, moments—moments that transformed ideas into physical objects you can touch, hold, feel and use.

And for Tara and her team, that journey wasn't a marathon but a six-month sprint.

"In order to announce the Neutrogena MaskiD™ at CES, the prototype, the features, everything—all of that was created in a six-month window," she said. "Basically, we had this really smart, agile, cross-functional team meeting almost every day, trying to think of how we could use technology to personalize products. And we only got to our 'Eureaka!' moment because of that cross-functional team effort. We finally landed on a solution that answered the key question: 'How can we deliver the most value to our consumers in the most innovative way?' ”

Once the product started to take shape, Tara's role really kicked into high gear. Indeed, from her perspective, CES, for all its fanfare and publicity, was really just one piece of a larger puzzle.

"Our goal with CES was to catalyze public interest, showcase the product to encourage early adopters to sign up and get consumers involved as co-creators," she explained. "I'm happy to say we did that and more. It was a big success."

This latest announcement also builds on other recent landmark innovations from Tara's team. Notably, last year they announced Neutrogena Skin360™, a scanning tool that takes dermatologist-grade tech (a 30X magnification lens, LED lighting, moisture sensors) and shrinks it to fit in the palm of your hand. Plus, the tool can analyze your skin to show you how it's changed over time, which means you can customize your beauty routine accordingly.

Tara's hats are as numerous as her title is long. So what does a Senior Manager - External Innovation Strategic Marketing - Global Beauty at Johnson & Johnson do, exactly?

Tara explained: "My team and I accomplished so much during that six-month timeframe, and since then I've come to think of my job as making the impossible possible. But my job, in a nutshell, is quickly testing, learning and innovating. It's all about bringing breakthrough ideas to life as quickly, efficiently and compliantly as possible."

But that's certainly not all—not by half. On a quarterly basis, for instance, she plays host to "startup days," events that are hosted at Johnson & Johnson sites around the world. "The goal is to facilitate these really key interactions between startups in a given location and the people on my team and other teams at Johnson & Johnson," she said. "Often, we find that we have as much to learn from them as they do from us."

Next stop, on Tara's high-flying tour: Shanghai, home of our newest JLABS facility.

Take a quick look at the CVs of Johnson & Johnson leaders around the world and you'll see that many got their starts with us through internships. And so did Tara.

Flash back to 2005, when Tara was wrapping up her undergraduate degree in Materials Science and Engineering at Cornell (like so many of us at Johnson & Johnson, her story starts with a solid STEM foundation). While thinking hard about what to do with her career, she recalled suddenly having a kind of epiphany.

"It just dawned on me how many of my favorite brands were all under the umbrella of the Johnson & Johnson Family of Companies," Tara said. "I couldn't believe it." And that was the discovery that ultimately brought her here.

Encouraged to explore her interests—and to bring her natural passion and curiosity with her into the workplace every day—she thrived, rapidly progressing from intern to Principal Scientist within the R&D organization. Later, she pivoted to brand management, overseeing a slew of leading brands in our consumer health and beauty divisions, gaining key cross-functional perspective. And as she blossomed, she found that Johnson & Johnson supported her every step of the way.

Mentorship and Support at Johnson & Johnson

What's made Tara so successful during her 10-plus-year tenure at Johnson & Johnson? She's pretty clear on that point: It's been all about the support she's received.

"I really couldn't have done it without the great support and mentors I've had here," she said. "Within Johnson & Johnson, we think of mentorship, collaboration and networking as essentially ways of getting things done—only better and faster."

An experienced leader today, Tara's mentorship now trends in the opposite direction. For instance, she recently took part in a program called "Millennial Mind Swap," which she describes as a kind of "reverse mentoring" program—a way of pairing newer recruits with more senior colleagues.

And the timing was auspicious: Tara had just recently returned to work after going on parental leave, thanks to the great parental benefits Johnson & Johnson offers employees worldwide. "Given the timing," she said, "it just made sense for me to talk to my mentee—who happened to be the President of our US Self Care business—about what it’s like being a millennial mom today. It was a fantastic way to connect with an inspiring colleague and fellow leader, and to share my perspective with her."

She also noted what a difference Johnson & Johnson’s benefits have made for her personally. "Whenever I needed to work from home to be with my infant, everyone was always completely understanding. Compared to my husband—he only got a couple weeks off from work for paternity leave—the policies at Johnson & Johnson really felt like they were designed to empower me, to support me in my success."

When you join Johnson & Johnson, you'll discover amazing opportunities to make real-world impact while working alongside the brightest minds and most compassionate hearts. Every day we're bringing great ideas to life that can lengthen, strengthen and improve the lives of people everywhere.

Ready to see what's possible when you have the resources of the world's largest broadly based healthcare company backing you up? Check out all of the ways you can become a part of the Johnson & Johnson Family of Companies today. And if you're a student, don’t miss all of the great opportunities we've created just for you!