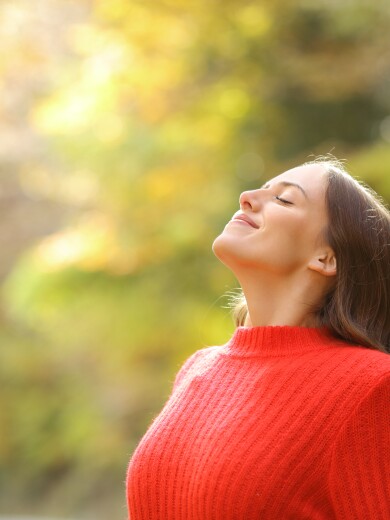 At first glance, the numbers around New Year's resolutions—specifically, our ability to keep them—don't look so good. Take the following timelines, for example:

If that seems discouraging, it's worth noting, by comparison, that people who refrain from setting New Year's resolutions but share similar goals—say, weight loss, reduction in alcohol intake or tighter controls on the budget—turn out to be even less successful in effecting transformation. Indeed, only 4% of this population reports success six months in. So the two-part takeaway here seems to be: While long-term goals are difficult to realize for everyone, we're better off with resolutions than without them.

So if you're looking to keep your own health and fitness goals on track for the remainder of the year, and to finally go the distance from Q1 to Q4, no sweat—or actually, yes sweat. But either way, we've got you covered. Check out these four tips to help you be, feel and do your best in 2022.

While long-term goals are difficult to realize for everyone, research suggests we're better off with resolutions than without them.

Carefully Calibrate Your Goals (Focusing on the Specific) 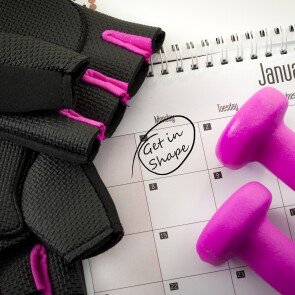 The scale and impact of the pandemic may be difficult to measure, but there's at least one area where it isn't: American waistlines.

It's true, lamentably. "Undesired weight gain"—to the tune of 37 pounds on average for men, and 22 for women—has been a reality for north of 40 percent of the U.S. population. So if you're looking to elevate your health and fitness in the 2022, you certainly aren't alone (which should make our second tip, below, a little bit easier). But you'll need to take action, too, and fast, which is why it's a good idea to zero in on the specifics.

Not sure, exactly, what kind of daily exercise is appropriate for someone your age, given your current health status and overall fitness level? While talking to your doctor is definitely a good idea before undertaking any kind of new training regiment—in fact, it's an essential first step—you might consult the CDC's handy guide to physical fitness for different age groups as well. 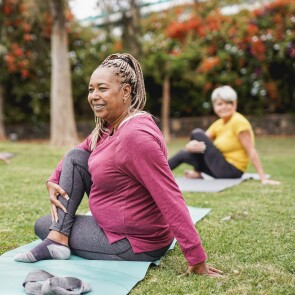 If you've set your own exercise goals in the past, and tried—but ultimately failed—to achieve them, then you know how hard staying motivated can be. But trying to progress entirely on your own might also be close to the heart of the problem. And there's an easy solution: Identify a workout buddy. Have someone go on this journey with you.

In fact, studies back up the wisdom of such an approach, with external reinforcement of this kind correlating with more positive health and fitness outcomes.

What's more, you and your workout buddy can also up the ante and throw in additional incentives—it could be something as simple as treating your buddy to coffee or lunch as a reward for achieving a given health-related goal, for example. Research shows that these kind of "tangible reinforcers" are another highly effective means of driving desired outcomes.

Of course, given the ongoing health and safety concerns around COVID-19, joining forces with a real-life workout buddy might not be 100% simple, but there are always digital workarounds. Take the success of recent Zoom workouts at Johnson & Johnson, in which teams have been gathering to practice group yoga, for example (or in the case of one team in China, group tai-chi). The point being, if you're willing to get creative about achieving your New Year's fitness goals, anything—and certainly the external reinforcement of a workout partner—is possible. 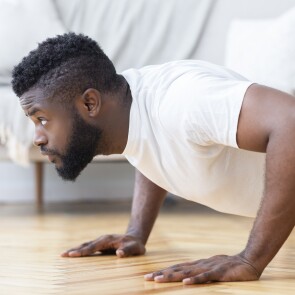 You might hear a lot about "the American obesity epidemic," but that's only part of the story. As a point of fact, the majority of U.S. adults currently meet the CDC's Physical Activity Guidelines for aerobic physical activity on a day-to-day basis.

What, exactly, do such "muscle-strengthening activities" entail?

The idea is to engage in exercises that target the major muscle groups across your legs, hips, back, abdomen, chest, shoulders and arms. Think:

The CDC recommends you dedicate a fairly significant chunk of time (ideally, 150 minutes in total) to these activities each week, so they should be a core part of your 2022 fitness regiment.

Considering that the benefits of robust physical activity run the gamut from lower blood pressure to reduced risk of cancer, this is something we all should probably prioritize this year. Research shows that the shift to mass remote work coincided with the emergence of a host of new mental health challenges—and these challenges are ongoing. At the same time, "burnout" (not technically a medical disorder but rather a "work-related phenomenon") appears to be rampant, and it has been cited as an underlying cause of the large-scale turnover known as the "Great Resignation."

So even if physical fitness is the primarily focus of your New Year's resolution, don't pursue it at the expense of your broader mental health and well-being. What's more, if mental health challenges do arise, it's critical for you to speak up about what you're experiencing.

Fortunately, physical activity in and of itself is often quite literally a step in the right direction from a mental health perspective. As one large-scale study concluded, for example, exercise of all kinds—"jogging, swimming, cycling, walking, gardening and dancing" are specifically cited—can effectively reduce anxiety as well as depression.

With that said, two takeaways to keep in mind:

Meanwhile, for our part at Johnson & Johnson, we've been hard at work for the past year-plus to eliminate the stigma long associated with dialogue around mental health and burnout in general. What's more, we're working with partners around the world to advance the conversation around mental health on a far more global scale.

Ready to Join Our Team Today?

Ever since our founding in 1886, Johnson & Johnson has been laser-focused on an all-encompassing mission: improving the health and well-being of people everywhere. It's a mission that we're living up to through the life-saving treatments and interventions we deliver around the world, and internally, too, through initiatives that empower our employees to be, do and feel their best every single day. It's something you'll get to experience firsthand when you join them.

To learn how, check out all of the roles we're hiring for at Johnson & Johnson right now, and consider signing up for our global talent community, too. The latter is an easy way to stay in touch, learn more about our culture and even get updates about jobs that might interest you in the future.