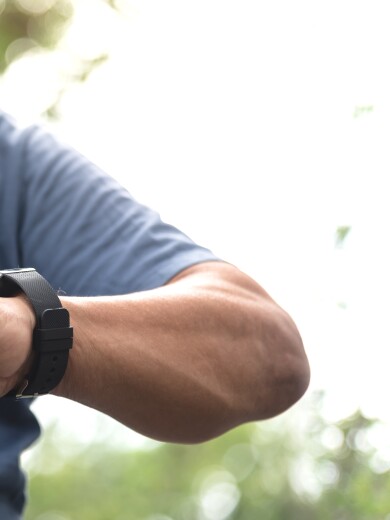 A newcomer to our Health Tech team—which is part of Johnson & Johnson Innovation—Nick's work today comes with a special mandate: "We’re fundamentally interested in possibilities, so the question we're always asking is, 'What can we do that’s new?'"

One initiative Nick has been deeply involved with certainly fits that description. HeartlineTM, a major research collaboration between Johnson & Johnson and Apple, is leveraging the capabilities of Apple Watch to study Atrial fibrillation (AFib), an irregular, often rapid heart rate that commonly causes poor blood flow and is a major risk factor for stroke.

The goal of the study is twofold: to enable earlier detection and diagnosis of atrial fibrillation (AFib), which could in turn reduce the likelihood of stroke, as well as to engage people and educate them about heart health generally. As a data scientist, Nick helped build key data reporting tools that continue to play a role in how the study is being managed. 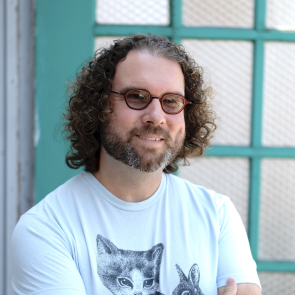 “There were a lot of firsts with that project," Nick observed, “and it could be a pioneer for new models of research and clinical trials. In the context of COVID-19, our use of Apple Watch means you have the ability to enroll in a study—and to actively participate in it—without having to physically go into a clinic.”

On top of HeartlineTM, there's also the app that Nick's been busily working on, Scout for Back Pain, which recently debuted on the App Store. The app helps patients more objectively track their back pain as they explore different treatment options, with the goal of identifying the personalized plan that's most effective for each individual patient.

Nick made it clear why that's so important: "There are a lot of treatment options available—physical therapy, mindfulness-oriented approaches, over-the-counter medication. But what we know from the research is that the best outcomes seem to come from applying some combination of these different options."

Helping patients find the right so-called "multimodal" treatment is exactly what the Health Tech team’s new app does. It's a good illustration of just how quickly you can start driving impact when you apply your expertise in data science to our collective purpose at Johnson & Johnson.

From Tech Start-ups to Health Impact

Before joining our team, Nick built his career with a slew of Bay Area tech startups, gaining exposure to a variety of different industries. At the same time, he frequently worked as a consultant to large enterprises, helping them, in his words, "figure out where to get started with AI, machine learning and other emerging technology."

It was that experience which ultimately led him down the path to a career in data science.

"I've always done data-driven organizational change," Nick explained, "because I have an abiding interest in what digital transformation looks like and how it happens." When Johnson & Johnson first reached out, in fact, that was what piqued his interest: "Initially, I was just curious to take the pulse of the organization, to see where they were in the journey."

But curiosity soon gave way to something stronger.

"I've always prioritized work that has a positive impact in the world, and right away I was impressed by those qualities—and the quality of the team—at Johnson & Johnson. They were clearly so focused on the health of people and patients, and they also seemed to have this sense of realism about what approaches to innovation would make sense at a place like Johnson & Johnson. So it became apparent to me that this opportunity was an incredibly strong fit for the things that are the most important and interesting to me."

Spoiler alert: He took the job.

Of course, coming from a 40-person startup, Nick understandably expected to encounter "at least a little bit of friction, or even culture shock, as I went to work for a company of this size. But I've found that we do the startup-in-a-big-organization thing better than anywhere else that I’ve seen."

There's just this tremendous willingness to invest in new forms of working, innovation and technology. That says good things about the opportunities in data science across the enterprise.

Today, Nick characterizes his colleagues within the data science community at Johnson & Johnson as "a very diverse bunch." So much so, in fact, that he isn't sure what it would mean to be a "typical" data scientist at our company. "Most data scientists don’t resemble most other data scientists," he said, with a laugh. "We all have these unique backgrounds, perspectives and areas of expertise."

But there's at least one thing they all have in common within our community: "We're really serious about doing data science in the right way—and using it for good."

We're applying data science to take on the biggest health challenges of our time, from HIV to bladder cancer, lupus and COVID-19. So if you're ready to join a community of the best and the brightest peers at a place where, like Nick, you can directly impact the lives of patients, check out all of the opportunities in data science we have available today.

And while you're at it, why not sign up for our Global Talent Hub, too? It's a terrific way to stay in touch, learn more about the culture of our company—and even get updates about jobs that might interest you down the line.