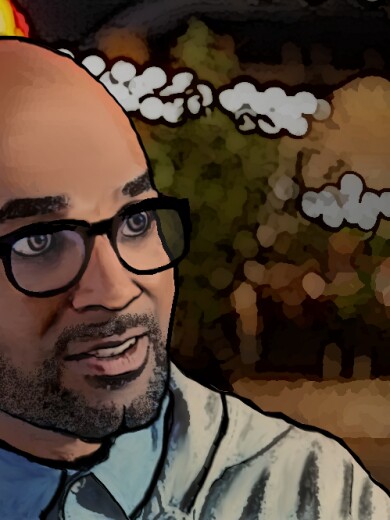 s Global President of our Self-Care and Consumer Experience Organization in Consumer Health, Manoj Raghunandanan is a lightning rod for digital innovation at Johnson & Johnson, but he wouldn’t be here if it weren’t for the remarkable journey that made him the leader he is today. Take a two-part trip with Manoj to learn more about Consumer Health, his unique background—and why you should join him to change the future of health for good.

"What's So Cool About Consumer Health"

You'll find that Manoj speaks with a kind of lawyerly precision—and while his gift for rhetoric is downright Lincolnian, it channels energy and optimism uniquely his own.

Manoj's mission? Building the next generation of digital capabilities at Johnson & Johnson.

“In Consumer Health, our number-one job is always to deliver for the billions of consumers and patients who touch and depend on our products every day," Manoj explained. "But now it’s also about delivering greater convenience to consumers, on their terms and in a much more personalized way. The paradigm has changed, and as a company we have to change in turn.”

Of course, when you're bringing to life such a bold new vision at the world’s largest broadly based healthcare company, the complexity is huge.

Imagine, for example, closing the loop between digital touchpoints spanning the Internet of Things, 3-D printing, telemedicine and more. No easy feat.

“This shift requires us to take advantage of data science, AI, natural language processing and emerging technologies. It requires us to understand the needs of our patients and consumers in a way that goes significantly beyond the lens of our products. So when I say we’re ‘digital first,’ what I’m talking about is as much a movement as a mindset.”

But if the challenge is large, so is the opportunity.

“What's really cool and dynamic about Consumer Health at Johnson & Johnson is that you’re constantly asked to come up with solutions to problems that don’t even exist yet, problems that are going to force you to stretch and grow. It’s an amazing opportunity for growth and development, personally and professionally.”

This is an opportunity for you to collaborate with the most incredible people you've ever worked with while making a positive difference in the lives of people, and even in the well-being of entire communities, all around the globe.

A Waiter, a Teacher and a Singer Walk Into a Bar…

… sounds like the setup for a bad joke, right? But seriously folks. Those really are the narrative threads from which Manoj’s story is spun.

His background is, er, eclectic. Where to begin?

Manoj recounted, "I spent the majority of my younger life as a waiter. Why am I telling you this? Because when you're a waiter, you learn about cross-functional collaboration. You learn about winning over customers. You learn about negotiating with your peers, whether that means covering for shifts or scrambling to get food out on time because, hey, you dropped something coming out of the kitchen. In the context of Consumer Health, it taught me how to take on ambiguity and make decisions on the fly. When you're a waiter, you're doing those things all the time.”

Manoj’s next chapter was no less memorable. Out of the cafe, into the classroom.

“I became a professor of mathematics at the university level, which really taught me about empathy. Motivating 18-year-old students at 8:10 in the morning to care about math? Not the easiest thing to do. But you learn to understand where they're coming from. You learn what's in it for them. You learn to create a motivating atmosphere where they can be successful. And those lessons have strongly shaped my leadership style today.”

Oh, and one more thing. Somewhere along the way—before Manoj earned his MBA in marketing and set out on the path to Johnson & Johnson—yet another vocation called him.

“It's true that I aspired to be a professional singer at one point,” he confessed, "because I was given a little bit of talent.”

While Manoj’s musical career never flourished, it did teach him valuable lessons about leadership, underscoring the importance of feedback most of all.

“Being an artist of any kind teaches you to appreciate feedback, because you're getting feedback all the time, and sometimes you want to hear it, sometimes you don't. But you learn to deal with it, to learn from it and to adapt and grow as a result.”

Reflecting on his earlier adventures from the present, Manoj turned philosophical.

“I am so thankful for my journey, for the ups and downs and the uniqueness of it. All of these pieces put together helped me get where I am today. So I think there’s no reason to be finite or defined in terms of where you're trying to go, because you never know where life is going to take you. You just have to be open and willing to go for things.”

He added, sincerely, “I probably could have done more of that myself. I’ll try to.”

Where Will Your Journey Take YOU?

Manoj’s one-of-a-kind journey is a testament to many things, including the fact that there are infinite paths to successful careers at Johnson & Johnson. So whether you're contemplating your next career move or your very first one, Manoj had this to say: “Find a company that not only shares your values, but values you. At Johnson & Johnson, I know that’s what we have, I know how special it is and I know you’ll feel it, too.”

With that in mind, be sure to check out all of the opportunities to join our team in Consumer Health today, and sign up for our Global Talent Hub, too. The latter is a great way to stay connected, learn more about life at Johnson & Johnson and even get updates about jobs that might interest you in the future.